A thrilling triple gameweek 37 has come to an end so let’s review the gameweek. Here’s a reminder of the fixtures.

Due to runs to the FA cup final and League Cup final, aswell as postponing a game due to illness Middlesbrough were left with a triple gameweek with Aston Villa on the Saturday, Manchester United on the bank holiday Monday and Blackburn on the Thursday. Middlesbrough are smack bang in a relegation fight.

Manchester United meanwhile still required points to claim the title and play Leicester and Middlesbrough on the Saturday and Monday as well as a rearranged game that was cancelled due to Champions League participation – it’ll never take off – against Newcastle on Thursday. Newcastle had a triple gameweek too, playing Saturday, Tuesday and Thursday.

The main worries of most managers was to use the Bench Boost (there was a possibility of having 39 players) or the Triple captain chip (Shearer, Ferdinand, Cantona, Ravenelli all playing 3 times).

Some had already used the Triple captain…to differing effect. 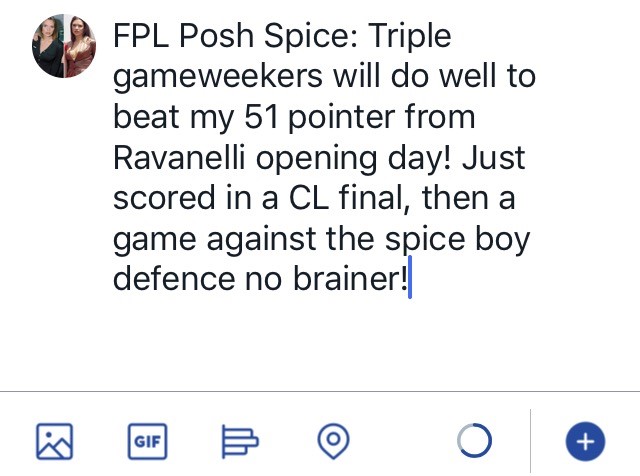 The Saturday games were a low key affair but with double gameweekers West Ham winning 5-1 thanks to a Paul Kitson hat trick and a John Hartson double, Sujan Shah was buzzing and had some great amunition for his Planet FPL cassette tape that week – some were regretting their decision though…

Out of position Robbie Elliott wing back, scored in a 1-0 win for Newcastle away at Arsenal leaving many Arsenal fans fuming.

Meanwhile fellow triple gameweekers Middlesbrough threw away a 2 goal lead before Ravenelli scored his second in the 90th minute to win 3-2.

Manchester United meanwhile played the first of three games in the week by drawing 2-2 with Leicester, youngster and one season wonder Ole Gunnar Solskjaer scoring two goals. Some people were bragging at buying the Norwegian early in the season.

With no games on the Sunday thoughts turned to the World Snooker final as Ken Doherty beat Steven Hendry whilst in the charts Michael Jackson’s “Blood on the dance floor” replaced “I believe I can fly” by R Kelly at the top of the charts.

The bank holiday Monday brought a rain soaked 3-3 classic at Old Trafford. United played a 4-3-3 with a midfield of Keane, Johnson and Beckham leaving some FPL managers fuming.

As against Leicester, United came back from 2 goals down to draw. Middlesbrough striker Ravenelli limped off with a hamstring injury leading to Ben Dinnery’s timeline going mad.

Gary Neville, a player who looks like he’ll never be heard about once he retires, was an unlikely hero with a goal and an assist for Ole Gunnar Solskjaer who returned for the second game in a row. Craig Hignett scored and assisted for Middlesbrough as Brazilian starts Juninho and Emerson scored to frustrate non owners.

On the Tuesday Wimbledon beat Liverpool 2-1 to hand United the title for the fourth year in five. Liverpool’s consolation was scored by a youngster called Michael Owen leading many to plan ahead.

Newcastle drew 0-0 away at West Ham with the same defence as against Arsenal leading to some debate on Twitter. 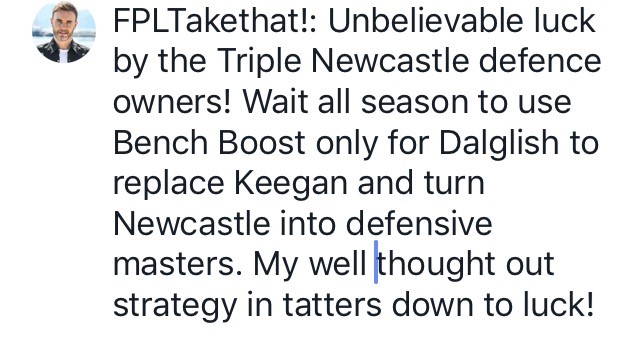 Leicester beat Sheffield Wednesday 1-0 with a goal from centre back Matt Elliott. This goal left both centre backs Steve Walsh with a goal and a clean sheet for the week.

On the Thursday Middlesbrough, Newcastle and Manchester United played their third games of the week. Middlesbrough played Blackburn and a 0-0 draw did little for Middlesbrough’s relegation battle or FPL managers. Another drab 0-0 at Old Trafford was only good for triple Newcastle defence as Srnicek, Barton, Beresford, Albert, Peacock, Albert and Elliott all started again. Gary Neville played a third game of the gameweek and added a clean sheet to his Monday night haul. Thoughts were mainly on the strikers though. 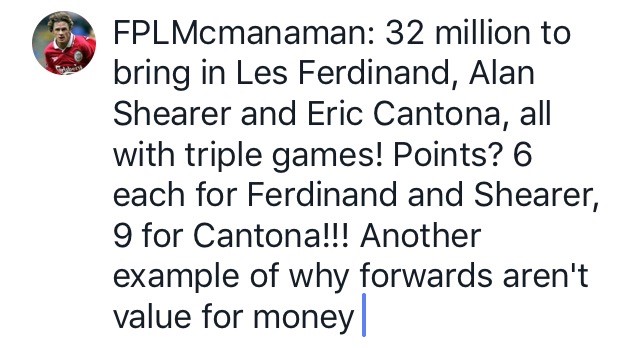 At least we were spared the usual debate Shearer v Ronaldo, the debate of who was best of the two most expensive strikers in the world is becoming very boring. Both are quality goalscorers and no one really cares if you think the fact Ronaldo has done it in various leagues makes him a better player.

Some FPL managers had storming weeks as the budget options came through, however there was the usual annoying humble brags and ranting. 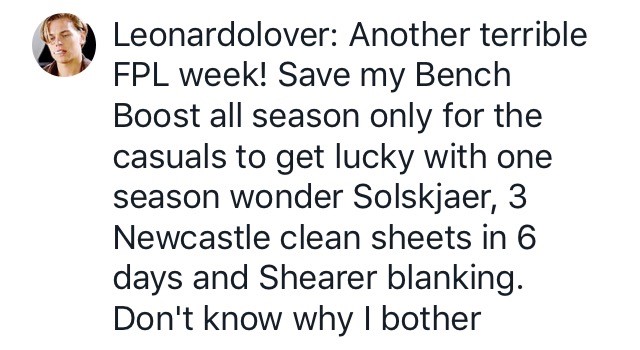 The team of the week was a bizarre 5-2-3 formation full of budget players.