As the 2019/20 Premier League season is around 2 months away lots of managers are already crunching data to see where they can improve for the coming season -highlighting their mistakes and trying to learn from them.

The data was to determine captain success Vs captain failure along with average captain points for managers in relation to their Overall ranks along with the % of points scored via captains. . I’m aware that 180 is a very low number of teams to analyse as approximately 6 million people play the game. However, I still feel it can give us some sort of idea of how the captain decision influences our final Overall rank. For the purposes of this study 8pts+ is classed as a captaincy success.

As I side note but not displayed in the results 28 of the top 30 managers got their Triple Captain pick spot;

3 for Salah in the same DGW

And finally the manager who finished 5th overall choosing Aguero in GW 37 – 6 points. I can imagine the sleepless nights this manager has had with what could have been. If he had gone for Aguero or Salah in the 57 point hauls he would have finished 2nd.

So what can we take from the data that was analysed?

Obviously, as the table clearly shows the higher the rank the more captain points were scored on average. There are a few anomalies but in general the overall position/points drop in line with the average captain points. 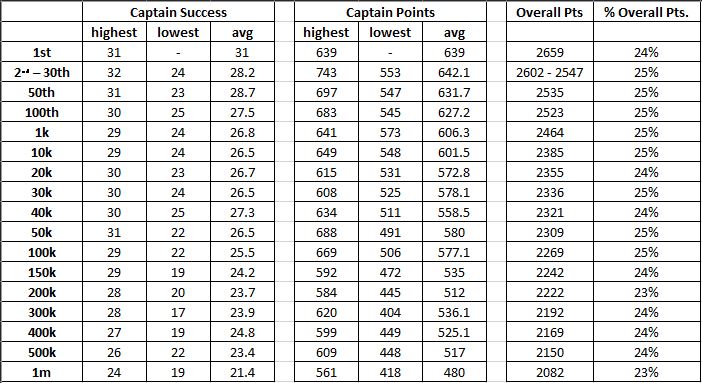 Does this mean the captaincy is vital for a top 10k or higher finish?

In addition to this if you take the average captaincy points of managers who finished 30,000th (578 points) compared to managers who fished 100th (627pts) this is a swing of 49 points yet they finished 187 points behind their rivals – meaning that even if they had gained the same average captaincy points they would have still been a whopping 138 points behind. Again evidence that shows that having successful captain picks doesn’t automatically mean that you will finish that much higher in the OR. 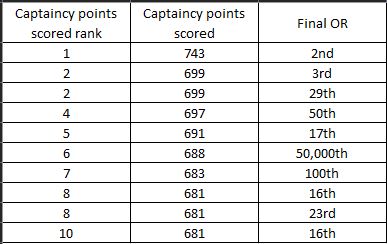 As you can see from the above table only one manager outside the top 100 OR features in the top 10 ranked managers with relation to captain points scored. However he finished 50,000th – so a good captaincy score doesn’t always mean a good rank.

On the flip side to that the eventual winner was 57 points ahead of his nearest rival in 2nd place even though he scored 104 captaincy points less than him.

Obviously as we all know the importance in choosing a successful captain week after week. But has looking at the data above given you the confidence to not let a poor captaincy option in any given game week ruin your season going forward? I’ll let you ponder that yourself. As we all know data can be interpreted in many different ways so do with this as you wish.

Interestingly, regardless of final points and OR it is clear that captain points contribute to between 23-25% of your overall score. The data in the first table clearly shows that Captaincy points, as important as they are, don’t make or break your season as every manager from the sample used had on average a 23-25%. So as a starter for 10 you are looking at this as a benchmark going forward. Each individual manager has their own aspirations at the start of an FPL season so regardless of your OR goal you should be aiming for over 25% of your points scored by your captain but no less than 23%. Anything below this you can take as a fail and above a success.

If we take my team as an example, I finished 31,000 with 631 captaincy points. This equates to 27% of my overall points. This leads me to believe that choosing a captain wasn’t my downfall last year. In fact 631 points was better than 10 managers who finished in the top 30. For the upcoming season I will be more than happy repeating these numbers with respect to captaincy points. Now I just need to figure out where it all went wrong as it clearly wasn’t my captain picks.