A GW1 look at Fulham…

First game back in the premier league for Fulham and despite the 0-2 result there were some positives to take from the match. Despite a really good first half, Fulham found themselves behind at the break. Having to chase the game against a really well organised Crystal Palace team, there was always the possibility of being caught out on the break and that’s exactly what happened. Wayne Hennessey had a terrific game between the posts for Palace and there was a penalty shout at 0-1 so on another day it could have been a different scoreline. There were some positives to take from the defeat however and some players who stood out from an FPL point of view.

Fulham were still able to continue their passing game. They had the second most passes with 671 and boasted an 88.1% passing accuracy. 274 of those passes were in the opponents half and only83 of the passes were backward. Fulham had the most crosses in GW1 (32) 5 more than the next team. Fulham had 66% possession in the game, 72.6% of this was in the opponents half and 68% in the final third. They also managed 15 goal attempts, 6 of which were on target. While they don’t account for much on the result of the game they do indicate that Fulham will continue to play their passing game and will be a very attacking team this year.

Mitrovic had a number of efforts on goal and looked especially lively in the first half. He had the most goal attempts of any player in GW1 with 7 and joint most shots on target along with Calum Wilson and Mo Salah (3). Encouraging signs for a budget striker who will no doubt be the talisman in this Fulham side. 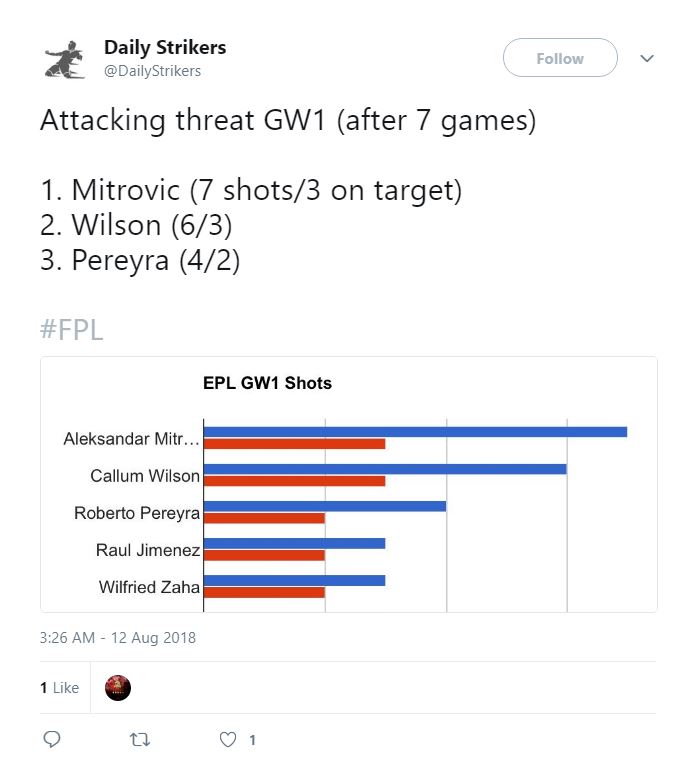 Cyrus Christie caught my eye with is advanced position down the right wing, something Ryan Fredericks did for much of last season. Christie was third among defenders for touches in the final third (35) ahead of Robertson (30) and Mendy (29). Chrystie managed the highest number of crosses of any player in GW1 however he will need to improve on his final ball into the box. He also managed a shot on target which Hennessey was able to get down to.

It’s only been one game and with 12 players signed in the transfer window, 5 of which were signed on deadline day it’s only natural that the team will need a bit of time to gel. Add to that injuries and suspensions in defence who will come back in and strengthen the side it’s not all doom and gloom. There is certainly room for improvement but there are encouraging signs there for Fulham.