A Statistical Look at Pep-Roulette

Pep Roulette? Guardiola Tombola? Pep Bingo? Whatever you call it, the chances are it has affected your FPL selection in some way since Guardiola joined City in 2016 and with popular pre season picks Sane and Mahrez playing just 120 minutes between them through the opening 3 gameweeks it is already casting a shadow over some squads this year.

But should we obsess over it quite so much?

Well yes and no. City offer some of the best potential for both attacking and defensive FPL returns so owning 3 of their players with the best chance for consistent minutes is important. However the ownership percentages of players like Mendy (33%) and Agüero (49%) mean even if they do get rotated you will be in the same position as millions of other FPL managers. Those shrewd enough to have a playing bench will gain an advantage in these situations.

Last season City had 5 outfield players (Otamendi, Walker, De Bruyne, Fernandinho and Sterling) that played 75%+ of their available minutes. No Premier League team had more and of the traditional top 6 only Spurs matched that. Liverpool had just two in Salah and Firmino. 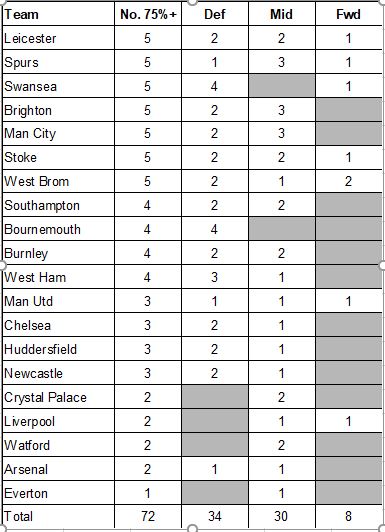 This shows City’s rotation wasn’t any worse than other clubs last year and that perhaps we place too much emphasis on it. Pep’s use of a core 6 (5 outfield plus Ederson) last season is a marked increase on his previous 4 league campaigns, one with City, three at Bayern, where he used just 4 players 75% of the time. Whether that is a trend that will continue or was a one off remains to be seen but identifying those core players early in the season can be beneficial. Otamendi rose in price quickly last season once it was clear he was first choice centre back and Mendy has already gone up 0.4m this year. Laporte has played all 3 games so far, scoring the equaliser at Wolves on Saturday, and at 5.5m could be a cheaper option for the City triple up, especially given the current uncertainty around minutes for their premium midfielders.

The following table shows how minutes and points were distributed between City’s midfielders last season. As you can see 5 midfielders (Sterling, De Bruyne, Sane, David Silva and Fernandinho) played 60 minutes or more in at least 27 matches last season. City averaged 1.86 goals every 60 minutes last season. Only Liverpool, Spurs and Arsenal averaged more than that every 90 minutes. Those 5 midfielders also only had a combined 5 appearances of less than 15 minutes which gives your bench a chance to step up when these players are rested and also limits the chances of a 1 point cameo. Sane and Sterling demonstrated an ability to score points in reduced minutes last season with 28 points coming from 5 appearances of between 15-60 minutes. Possibly profiting from entering the games fresh against tired and often demoralised defenders.

Pep will rotate his players, regardless of who you choose they will almost certainly get an unexpected rest at some point this season. The key for me is to have a strong bench to soften the blow and to not knee jerk players out on the back of a rest. A rotated City attacker is likely to be on the pitch for more goals scored than a nailed on attacker from a mid table team.