The Cherries are now preparing to enter their fifth consecutive season in the top flight having attained a very respectable 14th last season, finishing 11 points clear of the drop.

Last season started off extremely positively with 20 points from the first 10 games, with several value picks emerging from the AFCB ranks almost from day one. Unfortunately, due to a mix of harder fixtures and injuries to key players, as well as a notable ‘keeper crisis, saw us plummet out of European contention.

As an attacking prospect however with 56 goals, the most from any team outside the “big 6”. What added to the attraction from a FPL point of view as well was the distribution of aggressive points being relatively small with Calum Wilson netting 14 times (9th highest, 2nd highest of the “other 14”) as well as being awarded 9 assists (8th highest, 2nd highest of the “other14”)Fraser 7 goals (38th) with 14 assists (2nd highest, top of the rest). As well as the budget option of Brooks with 7 goals and 5 assists.

From a defensive view point, however the traditional wisdom has been to avoid our defence as it has been leaker than a rusty sieve, conceding an average of 1.84 goals a game last season with 70 goals total. It is worth nothing however that we kept 10 clean sheets last season, despite a very unclear goalkeeper position. Worth noting is that 31 of those goals were conceded against the “Big 6”, with 7 more from Burnley.

Key highlights include a fantastic 4-0 win over Chelsea at home, several big away wins (Watford, Fulham and Brighton), plus the immergence of Brooks and Travers at the end.

Looking forward, Bournemouth have had an exceedingly exciting transfer window, with; Lloyd Kelly, LB (Bristol City – £13m), Jack Stacey, RB ( Luton Town – £4m), Philip Billing, CM (Huddersfield – £15m), Arnaut Danjuma, AML (Club Bruges – £13.7m), Harry Wilson, AMR (Liverpool – Loan) joining. With no key players lost as of writing this, which after the season Fraser, Wilson and Brooks had last year is equal to a new signing. Lewis Cook is also likely to return in the middle of the park at shortly which will be a huge boost.

But what does all this mean for Fantasy football players?

Well if you follow me on twitter (and I hope you do!) you will have seen that I have been asked 3 main questions this summer; Wilson or King? Who’ll start in Full back roles? Who’ll start in goal? To answer this, I will start with a breakdown of our depth. 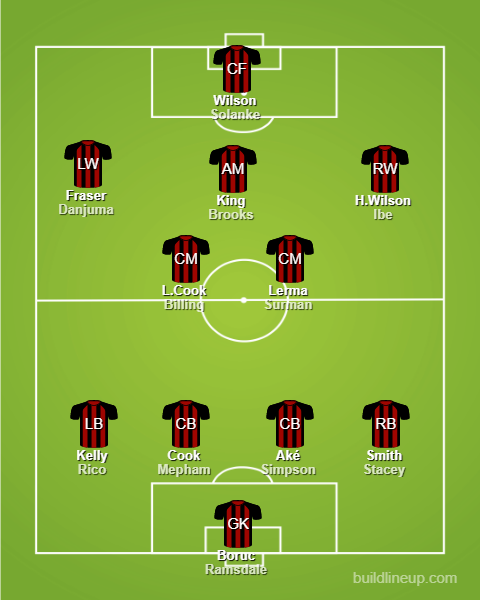 Starting at the top we have C. Wilson at the top of the spear, to answer the first question straight off for me Wilson is the best choice for FPL. Out of the forward options at Eddie’s disposal, when fit, he will be the first name on the team sheet and will be the target for all the new creativity we have added this year.  He has just signed a fresh, long term deal and will have his sights set on next summers England squad. I can see absolutely no reason he cannot provide a further 15 or so goals this season with another strong haul of assist to the players around him. With the additional depth behind him as well there is every chance, he may take the odd penalty as well.

King may suffer somewhat with additional minutes that Solanke is likely to get as well as the changes of shape that may happen due to the abundance of creative wingers. He still offers good value if you cannot reach the extra £1.5m and I certainly expect him to score his fair share of goals, he is also likely to play slightly further forward which may see returns.

Should one of the above become unavailable for a period of time Solanke at £5.5m could be fantastic value after a very strong pre-season.

Next onto the attacking portion of our midfield, the initial debate was Fraser vs Brooks, unfortunately due to a long-term injury to Brooks (~3months) we have lost one clear creative option from our team. However, what do our new signings mean for the FPL community?

Behind the attacking midfield options, perhaps nothing to note for your teams directly. The signing of Billing, however is likely to offer more steel in the centre of the park which will certainly offer a further defensive boost.

Onto the defence and the real speculation on my part, as this is not an easy due to a few injuries. First the full backs:

With centre backs I expect Cook and Aké to be first choice, so I don’t see huge value outside them unless there are injuries.

Finally, the goalkeepers! There are 4 real options here and until the season gets going it is pure guess work here. Best advice I can offer here is AVOID!

For those that want a bit more info please see below;

In summary lots of interesting players to consider and don’t write off our back line just yet!