The opening weekend of the season is only days away and the feeling among Brighton fans is a strange mix of fear and excitement. Last season was poor and we only stayed up by the skin of our teeth, so it might not be a surprise to see that, yet again, we are one of the favourites to get relegated. However a lot has changed over the summer. Club chairman and professional poker player, Tony Bloom, took his biggest gamble yet by sacking Chris Hughton. His replacement, Graham Potter, has arrived and we’ve already seen him implement his slick, attacking football that he was known for at Östersunds and Swansea. The polar opposite to the defensive, rigid 4-5-1 we saw for most of last season when Hughton was in charge. After a below-par 2-1 loss to Fulham in preseason, Potter switched it up and opted for a 3-4-3 for the last two friendlies, and it was very successful! The energetic wing backs provided the width, the rotating front three caused problems for the opposition and our strong core meant we were still defensively sound. The £20million signing of Webster, who is a centre back, further suggests that the 3-4-3 will be the way forward for the Albion. It could take some time for the players to get used to a completely new system, but a 2-1 win against a strong Valencia side shows they are adapting well. It was the final game of a very encouraging pre season campaign, and will give fans and players a big confidence boost heading into our third Premier League season!

In the last few weeks I’ve been asked plenty of questions on twitter regarding the new signings and the likely lineup for gameweek 1, and this article is my best attempt at providing the answers, possibly creating one more headache ahead of the FPL deadline!

At this point in time, it’s hard to tell whether we are any better defensively so investing in Brighton defenders comes with a slight risk. The general idea is that a more offensive style of play will lead to more goals conceded (which it might!), but it could have the opposite effect. The big difference I’ve noticed so far when defending is that we haven’t been inviting pressure on ourselves like we did last season, which could result in less big chances conceded. Maty Ryan (4.5 GK) will begin his third season at the club and he is nailed on to start in goal. The Australian is a value option and has been a popular choice with FPL managers so far, possibly due to the lack of alternatives at his price point. Our first six fixtures are favourable so Ryan is certainly worth a look, especially if you’re planning an early wildcard.

The signing of Adam Webster (4.5 DEF) adds to an already strong central defence but I’m not sure if he’ll be thrown straight into the team, I wouldn’t be surprised if Dan Burn (4.5 DEF), who was very impressive preseason, starts against Watford. Lewis Dunk (4.5 DEF) and Shane Duffy (5.0 DEF) will complete the back three which hope to improve on last seasons total of 7 clean sheets. Keeping hold of Lewis Dunk despite the strong interest from Leicester is more important than any signing we have made in this window. He’s been a key part of the team for many years now and the ball playing defender has seamlessly fit into Potter’s system, regularly stepping out of defence and driving the team forward. He’s currently included in 7.9% of FPL teams, which makes him the highest owned Brighton outfielder, and I think he’s a nice enabler. Many people might have bad memories of Duffy after the double gameweek horror show last season (I’m still not over it!) which might explain why I haven’t seen him in any drafts so far. Players like Trossard and Groß will always be aiming for the Irishman from set pieces, which was shown in preseason as Duffy finished as our joint top scorer after heading in three goals. His goal threat will always make him a consideration for FPL teams, however I’m not sure I can justify spending 5.0 on an Albion defender, especially as we are yet to find out how strong Potter’s Brighton will be defensively.

Moving on to the wing backs, and this is where it starts to get really interesting. I think Martin Montoya (4.5 DEF) could emerge as a fantastic option for FPL teams, and he is the only Brighton player who has made it into my latest draft. He looked like a natural at wing back and often got forward down the right hand side. Also, there isn’t much competition for his place, meaning he is almost nailed on to start every week which makes him an even more attractive pick. His current ownership of 0.5% means we can consider him as a huge differential, and his bargain price comes with low risk, which could have a high reward. I’ve always thought Solly March (5.0 MID) could be used as a wing back as he is just as good defensively and he is going forward. He featured against Birmingham and Valencia in his new position and I was impressed. He’s currently keeping Bernardo (4.5 DEF) out of the team, who was one of the only bright sparks last season, which shows just how well Solly is doing. March still found himself in attacking positions although the slightly deeper starting position makes him less enticing as an FPL option, and it’s also important to remember he won’t get clean sheet points as he’s listed as a midfielder. March is a winger who can defend, and Montoya is a full back who can attack, so they are both fully capable of playing wing back, as well as Bernardo, who I hope finds his way back into the team soon. 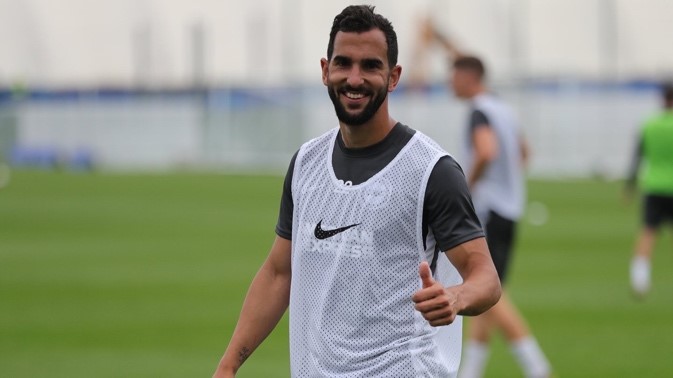 Dale Stephens (4.5 MID) and Davy Pröpper (5.0 MID) are the tried and trusted partnership in the middle of the pitch and keep things ticking over. Even though they won’t be playing as deep as they did last season, I still don’t see either of them as real options in FPL. Deadline day loan signing, Aaron Mooy, is a different option and will bring added competition in midfield, which can only be a good thing. It’s difficult to say if he’ll be a viable option in FPL as he hasn’t been assigned a price, and whether he will be a regular starter remains to be seen. Yves Bissouma (5.0 MID) is one of our most talented, exciting prospects and will push for a starting spot in the side when he returns from injury. Pascal Groß (6.5 MID) was an FPL favourite back in the 2017/18 season where he racked up 7 goals and 8 assists. He’s still one of our most creative players and we always look better when he’s on the pitch, but unfortunately switching to the 3-4-3 formation might negatively affect Groß as he doesn’t naturally fit into the system. I’m not sure if he’d be effective in a two-man midfield so I think it’s more likely that he takes the place of one of the wide players. I think he’s still one to watch and it will be interesting to see what role he plays in the team. But if you’re considering him for gameweek 1, I think it’s best to look elsewhere.

However, one player I’m definitely considering is Leandro Trossard (6.0 MID), who joined the club in June from Belgian side Genk. He boasted impressive stats last season, scoring 22 goals and assisting 11 times, while captaining his team to a league title. But it was a preseason friendly against Birmingham when he assisted 3 of our 4 goals that caught the attention of FPL managers, and that was when the Trossard train started to pick up some speed! From what I’ve seen in preseason, he’s a great dribbler and has an excellent delivery, so he might be on some set pieces too. Trossard’s tricky, low centre of gravity movement has even been compared to compatriot Eden Hazard! I’ve been impressed so far and it seems like he’s the creative spark we’ve been missing. Obviously the Premier League is a tough step up from the Belgian league and it could be a different story when he’s facing world class defenders week-in, week-out, but the early signs are promising. Brighton’s favourable opening fixtures could tempt some managers to take a punt on our new winger, and I’m all for it! Trossard has been playing on the left side of the front three, on the other side is Jurgen Locadia (5.5 FWD), who has been one of the surprises in preseason. He’s much sharper and seems like he has a point to prove, because at times last season it looked like the former PSV player was out of his depth in the Premier League. He could be a good option as he should start on the right against Watford in gameweek 1, but I’m not convinced long term as there is lots of competition in this area of the pitch. Alireza Jahanbakhsh (6.0 MID) might get the chance to show he was worth the price tag after a disappointing debut season, and Jose Izquierdo (5.5 MID) will be back in the mix if he can overcome his recurring knee injury which kept him out for most of last season. 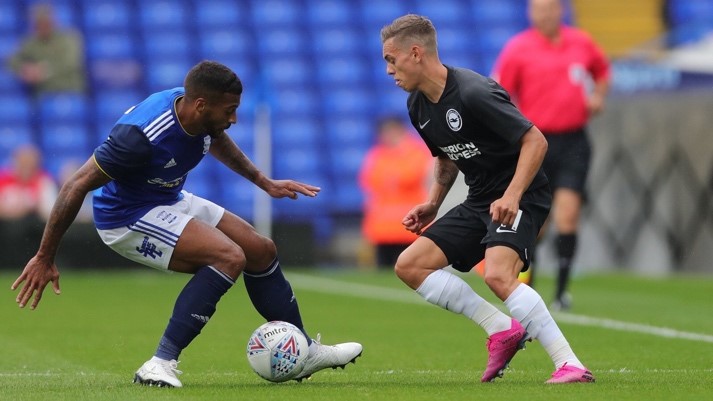 It looked like Glenn Murray (6.0 FWD) would be the main man yet again this season, until the signing of Brentford striker Neal Maupay (6.0 FWD) for a reported £20million. Maupay is someone who we’ve been linked with for years so it’s nice to see we’ve finally got our man, and he’ll add an extra dimension to our existing forward options. He finished joint-second top scorer in the Championship last season with 25 goals and will hopefully be our long term solution to club legend Murray, who isn’t getting any younger! I think the Frenchman would work really well in our flexible, rotating front three that we’ve seen since Potter took over. The forwards are constantly switching and interchanging, which gives the main striker plenty of support. However, I wouldn’t be rushing to get Maupay in my FPL team just yet as he didn’t have a proper preseason at Brentford, so I can see Glenn Murray starting against Watford. The signing of Maupay might push Florin Andone (5.0 FWD) further down the pecking order but he hasn’t done anything noteworthy to force his way into the team, although he will still be a good squad player this season.

Leandro Trossard and Martin Montoya seem to be the standout FPL picks from this Brighton team, although a case can be made for Maty Ryan, Lewis Dunk and Solly March. It’s important to remember that Graham Potter is tactically flexible so we could see different systems, players and tactics used depending on the situation. The 3-4-3 seems like it’s the main formation but I wouldn’t be surprised if we see the 4-2-3-1 at points during the season. Pascal Groß would be a more natural fit if that’s the case, playing behind a lone striker. But adjusting to a four at the back would reduce the appeal of Montoya as he wouldn’t have the freedom to get forward, as opposed to the 3-4-3, where he can join in with the attacks.