Burnley’s 18/19 campaign started way back in July when Cenk Tosun, Seamus Coleman and Cedric were all players being seriously considered as FPL assets for the forthcoming season. Their Europa League campaign was short-lived, ending in defeat to Olympiakos following victories over Aberdeen and Istanbul Basaksehir in the early qualifying rounds, however the effects of this on what is one of the smallest squads in the league could be telling towards the end of the season.

Burnley’s Premier League form seemed to suffer as a result of their Europa League campaign and that saw them deep in relegation trouble at Christmas, a Boxing Day hammering by Everton left them sitting 18th with just 12 points accrued from their opening 19 games. Sean Dyche has cited this result as the catalyst for Burnley’s recent resurgence and an unbeaten 8 game sequence that produced 18 points followed which coupled with Cardiff’s demise seems to have significantly eased any relegation fears. However back to back defeats against Newcastle and Crystal Palace have brought their run to an end and an away trip to Liverpool in gameweek 30 doesn’t offer the easiest of opportunities to bounce back. 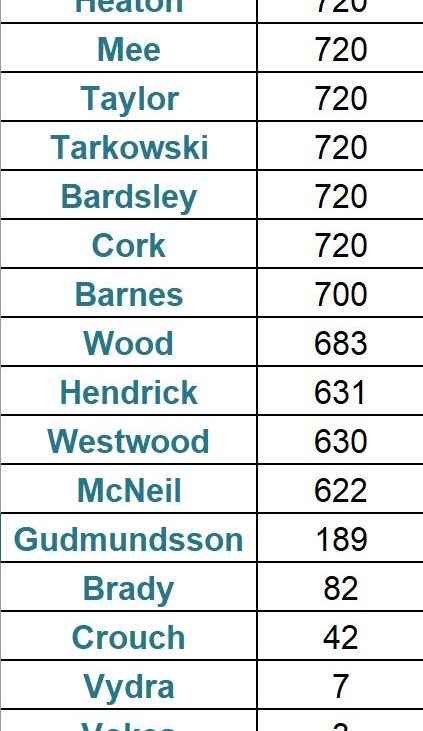 Since New Year’s Day Burnley have played 8 league matches with 6 players completing the maximum 720 minutes and eleven featuring in more than 620 minutes. During this period Dyche has made just 13 of a potential 24 substitutions and on 2 occasions has made no substitutions at all, a feat usually reserved for Sunday league teams who, having failed in a last minute bid to convince Big Dave to come out of retirement, turn up with a bare eleven. The returns of Gudmundsson and Brady from injury will of course improve the situation but such a workload being placed on a thin squad that started the season considerably earlier than any of their rivals is definitely a consideration when weighing up any late season moves for Burnley players.

With confirmed fixtures in Gameweeks 31 and 33 many will be looking towards Burnley players to help navigate the blanks and the recent goalscoring form of Chris Wood and Ashley Barnes will no doubt make them attractive options. Barnes is third behind Aguero and Mane for goals scored over the last 8 matches and 2nd only behind Aguero for expected goals over the same period. However Burnley’s next 3 fixtures see them face 3 of the 5 teams with the lowest expected goals against so far this season.

Burnley could well prove to be valuable assets for the forthcoming blank gameweeks with decent fixtures in both and one of the most in form players in FPL at the moment. However their early season exertions could well be catching up with them and a lack of squad depth could prove challenging for the remainder of the season.