A lot of build up to our first home game of the season with a lot of Cardiff fans expecting us to come away with a home win. The game didn’t live up to some expectations and in reality it was probably a game of championship level standard. Whilst it wasn’t our best performance I feel like we played good enough to win and happy that we’ve now got our first point on the board. Huge thanks goes to Neil Etheridge (£4.5m) for superbly saving another penalty right at the end of injury time so happy to take the point in the end and a first Premier League clean sheet which from Etheridge’s point of view is very much deserved.

I think Kenedy should have got a red for his kick on Camarasa and this could have changed the outset of the game going forwards with Newcastle potentially finishing the game with 9 men. I think it’s a shame that somehow the ref didn’t see it nor did it get flagged by another official.

Bamba (£4.5m) came close with a header from a set piece which I think is going to be our main threat this season but we need to be more clinical and get some goals on the board.

Zohore had a few chances with a header he put wide which he probably should have scored. It wasn’t his best game at all and if Warnock decides to stick with the 4-3-3 and the midfielders that played against Newcastle, I can see him dropping Zohore and giving Reid a chance against Huddersfield.

I was really impressed with Arter and Camarasa (£4.5m) and I think they improved the team in open play which is something we’ve always struggled with. The midfield three including Ralls is probably our best combination and I’d like to see it get another chance against Huddersfield.

This heat map below shows the hard work Arter put in and he really showed how he’s by far our best midfielder. We need to take advantage of the loan we have for the season and I think if we do, he will be the focal point in everything the team does. His comments dismissing pundits views of Cardiff go to show the commitment he is showing towards the club as well. I look forward to seeing him play more this season. 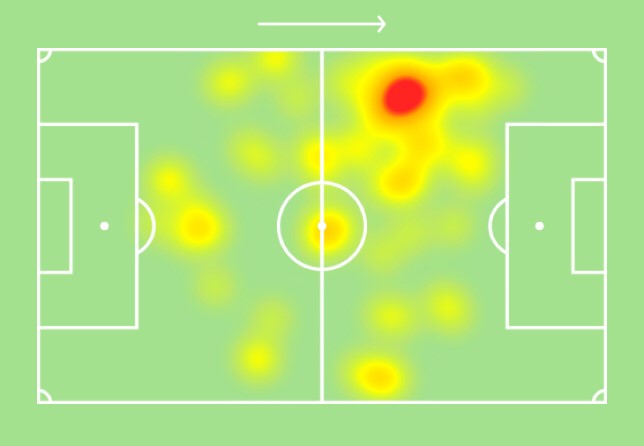 Murphy worked really hard in the Game contributing with 7 crosses and 17 sprints. I think he is going to be the main flair in the team and I think he is already giving enough from the one game he has started. His heat map below shows how hard he works on the left wing. We just need better performances from our strikers and be clinical with the chances created. 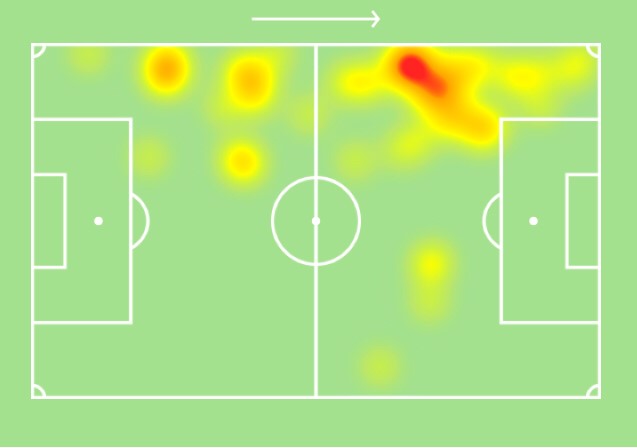 Bennett was very active down the left flank which earned him 2 Bonus Points on the weekend and he has the highest BPS score out of the whole team. If he nails down his place and continues to contribute like he did against Newcastle, you might see him sneak into the Bonus Points quite often this season

We really should have capitalised on being a man up and it’s games like this where we should have won and those 2 extra points could prove pivotal at the end of the season.

We have now failed to score in both league games for the first time since November 2015. We really need to improve on wasted chances. We had 12 shots against Newcastle but only 1 ended up on target with 6 off target and 5 blocked. This is disappointing as you’d think 12 shots for a team like Cardiff would be a good statistic. This compares to 12 shots from Newcastle but 6 of those were on target. We need to improve to be more efficient like Newcastle to give us a better chances of getting goals on the board.

I think some changes will be made for the away game against Huddersfield next Saturday. I’m not sure where Peltier (£4.0m) was which shocked a lot of FPL Managers and angered a lot of managers because Cardiff actually managed to keep a clean sheet. He must have been injured but I’ve not yet seen anything about it. If he’s still out then I can see Manga (£4.5m) keeping his place at right back. I personally would like to see the midfield three stay the same with Reid replacing Zohore upfront after a poor display from the Danish forward. Junior Hoilett (£5.5m) didn’t have his best performance in a City shirt. I’d presume he along with Murphy will keep their places but with Paterson (£5.5m) and Mendez-Laing (£5.0m) lurking from the bench, I could see Warnock making a change up top if someone impresses in training this week.

I think Saturday will bring a tight game between two teams who will likely be fighting for relegation this season so if we can get the win, it will be very valuable. This weekend’s result was very disappointing and we need to perform better, especially at home.