Cat vs Terrier: An FPL experiment

A Terrier living with a cat was bound to lead to conflict. Cats and dogs have a more lengthy and acrimonious history than any football rivalry.

It all started at the end of the 17/18 season when I set up a final gameweek team for my cat, Charley. With the aid of a Bench Boost she scored 121pts, beating my best ever score by some way and more than doubling my score for that week.

I assumed this was beginner’s luck, comforting myself with the thought that FPL is mainly down to chance and it could just as easily have been me sitting on a gameweek rank of 632.

This season, I decided to test this hypothesis by letting Charley play the game all season. Surely my ability to plan and use higher reasoning would allow me to beat even the luckiest of cats over 38 weeks?

Here I discuss how I conducted the experiment, how it turned out and what implications it has in the long-running ‘luck vs skill’ debate. 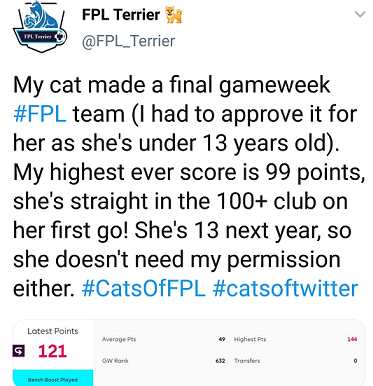 Charley is a cautious cat and so for the sake of simplicity we agreed from the beginning that she would take no points hits. As with her final gameweek team, I picked a solid baseline team and let her make adjustments using the Feline Premier League decision tubeTM.

This allows Charley to make binary decisions such as whether to stick or twist with her captain, use or roll transfers or change the benched players. The options are written on either end of the tube and she chooses based on which side the treat comes out of.

As her assistant, I chose the details of the changes due to my (assumed) superior football knowledge but Charley had the final say (often requiring many treats to come to a conclusion). Despite many bizarre decisions, including wasting free transfers when there were multiple injured players in the team, Charley’s consistency has been remarkable.

She scored below 50pts only eight times all season and only once suffered more than two consecutive red arrows. I beat her score in exactly half the gameweeks (19/38), meaning my decisions were no better than those made by random chance. 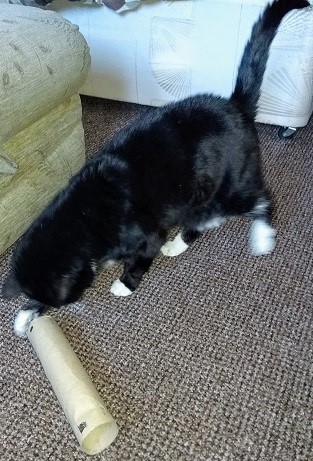 As with other decisions, I let Charley choose when to play the chips. I expected this to be where she fell short of human managers due to the random nature of her strategy.

This proved to be a false assumption and her chip use has me wondering if I’ve been hustled. She was 10 years old when I adopted her; maybe she has more fantasy football experience than she’s letting on?!

A GW5 wildcard was a common strategy and Charley was surprisingly conventional here, to her own detriment. Three reds in four followed, with two of her three sub-40 scores of the season coming during this period.

I was happy to gain insight from Charley’s wildcard and deployed my own a week after her. I got my three best scores of the season up to that point and finally overtook her in the rankings. Suddenly, Charley was helping me play FPL rather than the other way around.

Her first chip was played in GW11. I thought this was too early, so used Triple Captain as I consider it the least valuable chip. When I noticed her captain was Sterling at home to Southampton, I was worried though.

A haul of 63pts from one player put her in the 100+ club for the second time in 12 gameweeks, with a GW rank just outside the top 3k. Was she just lucky again or a maverick genius? Either way, she overtook me again with a move I wouldn’t have dared make.

In GW17, she looked to further her lead with the Bench Boost. This time an unexpected absence from Bellerin lowered its impact slightly. Wan Bissaka was auto-subbed in, meaning she only gained a modest 11pts from the remaining three subs. Still, she ended with 81pts overall and a top 6k GW rank. With a 55pt overall lead, my cat was starting to race ahead of me.

Charley used her remaining Wildcard and Free Hit to devastating effect in weeks 35 and 36 respectively, ending any remote chance of me catching her and scoring an average of 80.5pts in the last four gameweeks. While I was messing about with Chunky Chips, Charley had the Microchip strategy up her fluffy sleeves.

In this week, I forgot to ask Charley for her moves. It was a pure accident and nothing to do with the fact that 2/3 into the season, a creature that eats grass and chases its own tail was out-playing me.

I did a retrospective analysis and my mistake cost Charley 20pts in total. I scored 30pts more that week, moving 16 ahead overall. It was a hollow victory and I knew that I still had a way to go to prove that I’m genuinely the better player, a task I ultimately failed at.

With those extra 20pts, Charley would have finished with a rank inside the top 80k. The mistake left her just outside the top 100k. Still very impressive but I’m sure it’s no coincidence that she only started scattering her kitty litter across my living room floor since it happened.

Charley finished 78 points ahead of me and 210k places above me in the rankings. I think this experiment proves that luck plays a huge part in FPL and it is largely a game of chance. This is backed up by analysis using @FPLreview’s website (www.fplreview.com/seasonreview/). 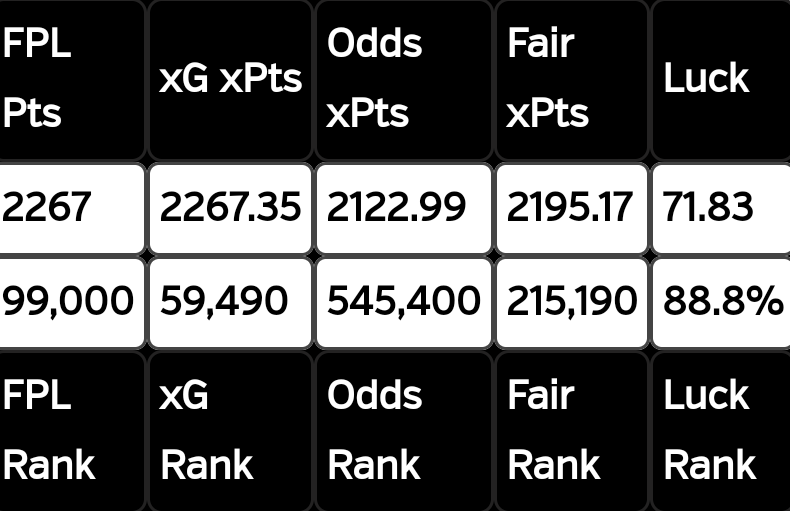 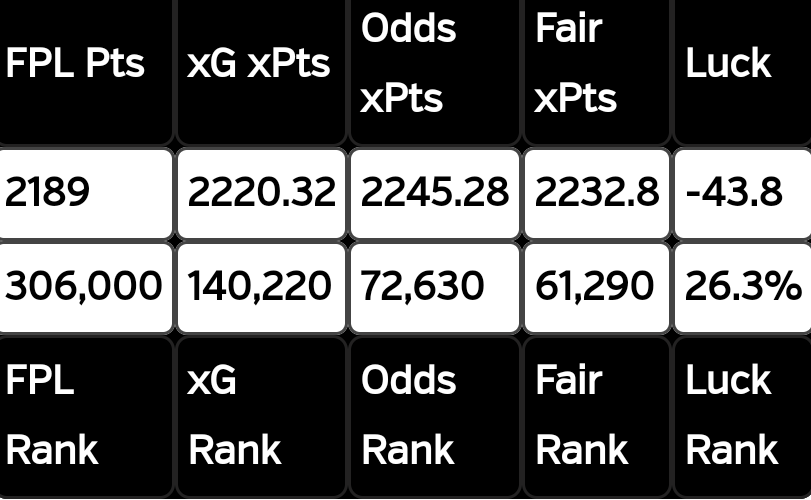 I had a luck score of -43.8, whereas Charley’s was +71.83. According to this analysis if luck truly evened out over a season, I would have finished well above Charley. And that’s the real quiz.

The independent variable I looked at was strategy, with player choice being the control variable (meaning I picked the players for both me and Charley, whereas we used different strategies). In a poll I conducted at the end of the season, 75% of the FPL community voted that choice of player is more important than strategy. Perhaps next season I could test this by using the same strategy as Charley but differentiating by player choice alone.

Charley isn’t the only non-human FPL player out there. The winner of my mini league was Ernest Catingway (@FPL_Ernest); meaning two of the top three were cats! @ClaretFPL tweeted about the possibility of letting a fish make his decisions next season, which based on my experience could be a great idea.

I’m sure there are more animals playing out there and I will be running the Fantasy Pet League for the 19/20 season, so if you think you know the next Kenny Dogleash, Alex Purrguson or Sam Mallardyce, tweet me for the league code! (Photo evidence will be required to prove animal status) 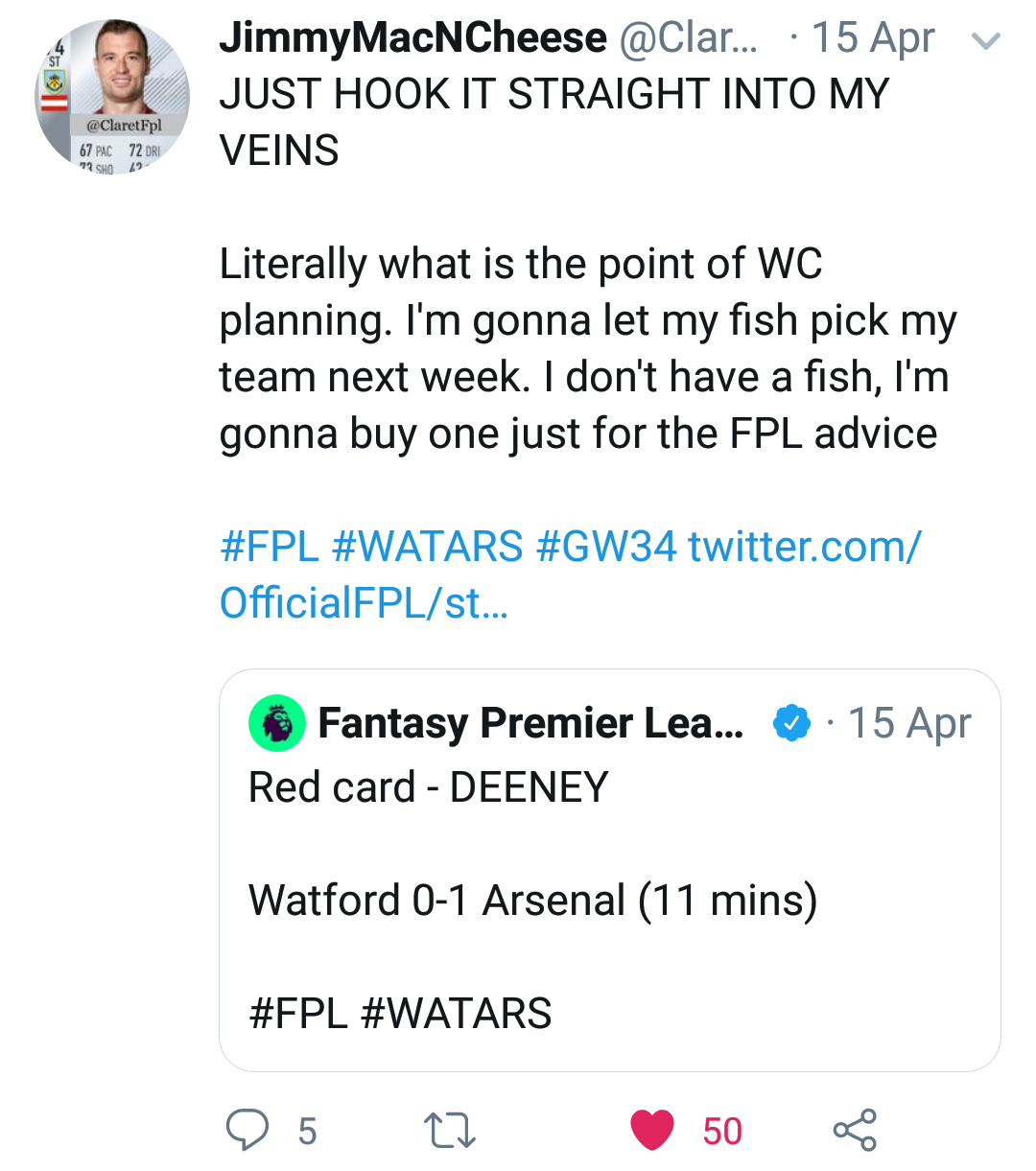