Anybody who has studied last season’s clean sheet data will undoubtedly be considering Man Utd’s defensive assets for their FPL team following an impressive 19 shutouts in 17/18. With the notoriously defensive José Mourinho still in charge and the summer addition of Fred only enhancing his bus parkability I wouldn’t dissuade anyone from this thinking. However, a look at the xGA (expected goals against) data on understat.com from last season shows that Man Utd possibly over-performed in terms of defensive FPL returns.

Man Utd conceded 15 fewer goals than expected last season. No team had a bigger difference between xGA and actual goals conceded last season. The only team that came close was Burnley who conceded 13 fewer goals than expected. Nearly every engaged FPL manager will have owned a Burnley defender at some point last season but the xGA data shows they were expected to concede more goals than rock bottom West Brom and a similar amount to Brighton and Huddersfield. With their defenders having been hit with a price rise and Europa League involvement they may not represent the best value this season. Southampton were 6th for xGA last season so the pre-season enthusiasm for £4.5m Cedric may be well founded.

Looking at the overall xGA data doesn’t quite tell the whole story for those of us looking for FPL insight. Conceding 38 goals (1 in each Premier League game) would give 0 defensive FPL returns whereas conceding 57 goals (3 goals in 19 games and 0 goals in 19 games) would give a defensive FPL return of 57 points. Looking at the number of games each team had with a low xGA may give a better idea. Last season an xGA of less than 0.5 resulted in a clean sheet 66% of the time. Between 0.5xGA and 1xGA that decreased to 43% and an xGA of greater than 1 led to a clean sheet 13% of the time.

The following table shows each team’s xGA split into those categories for each game last season.

Man City were well out in front with 16 games under 0.5xGA. Liverpool, Spurs and Chelsea all had 11 whereas Man Utd only had 4 games with an xGA of less than 0.5, the same as Watford and relegated Stoke. Possibly showing that Man Utd’s impressive number of clean sheets last season were due to world-class goalkeeping and poor opposition finishing rather than defensive solidity.

From a more individual perspective, I’ve looked at the % of minutes each defender played and the % of goals they conceded. The following table shows the players with the biggest positive difference between minutes played and goals conceded. 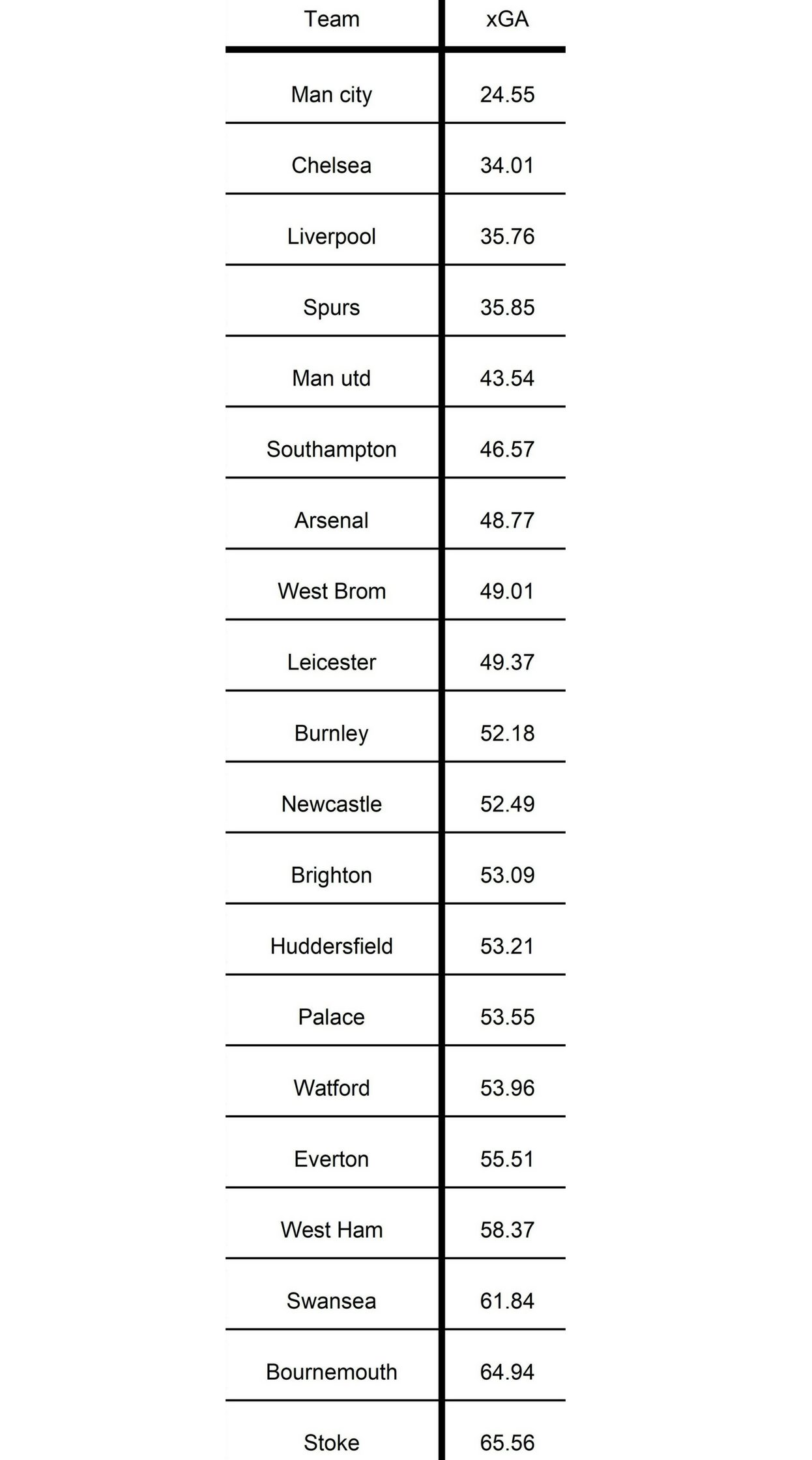 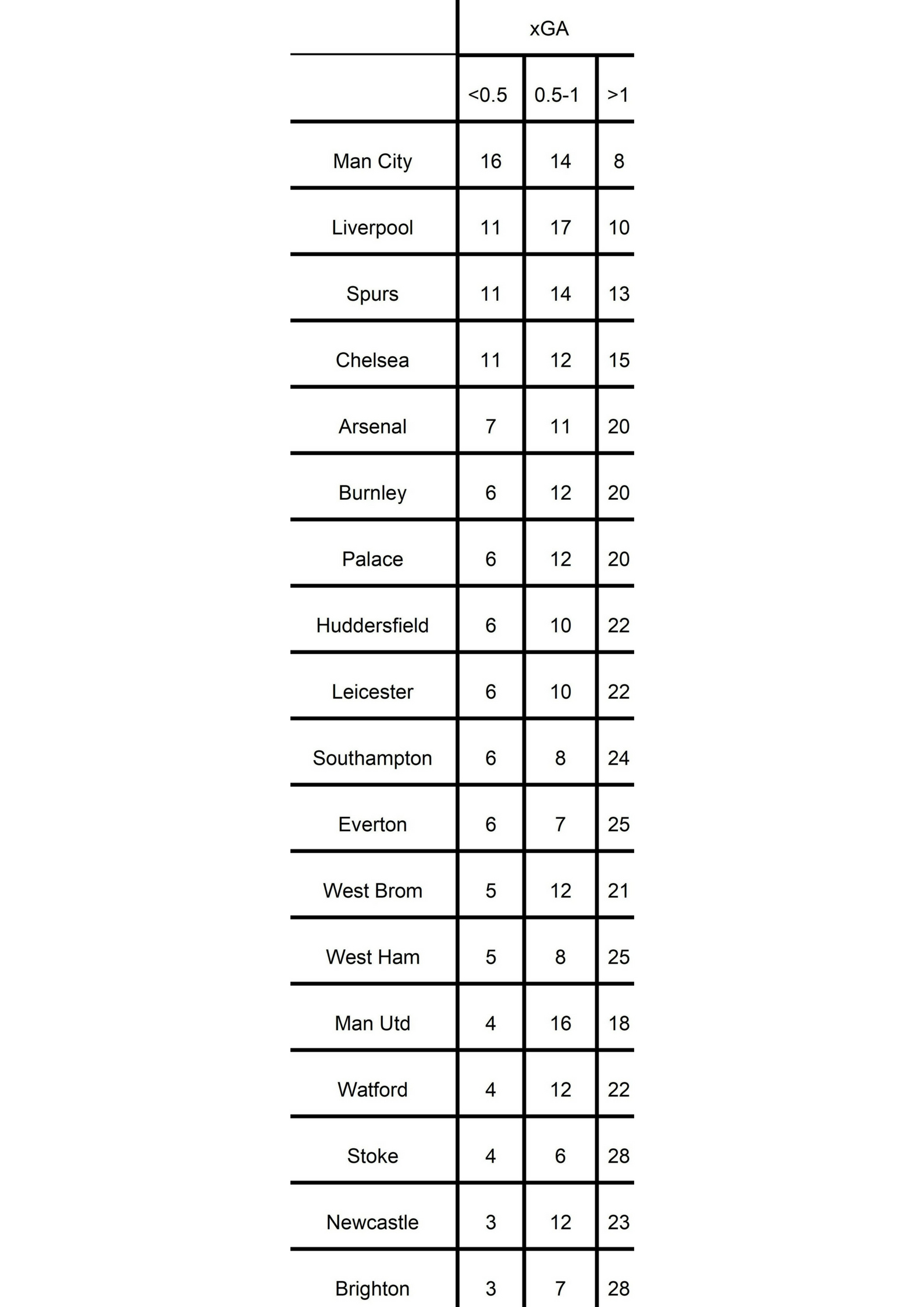 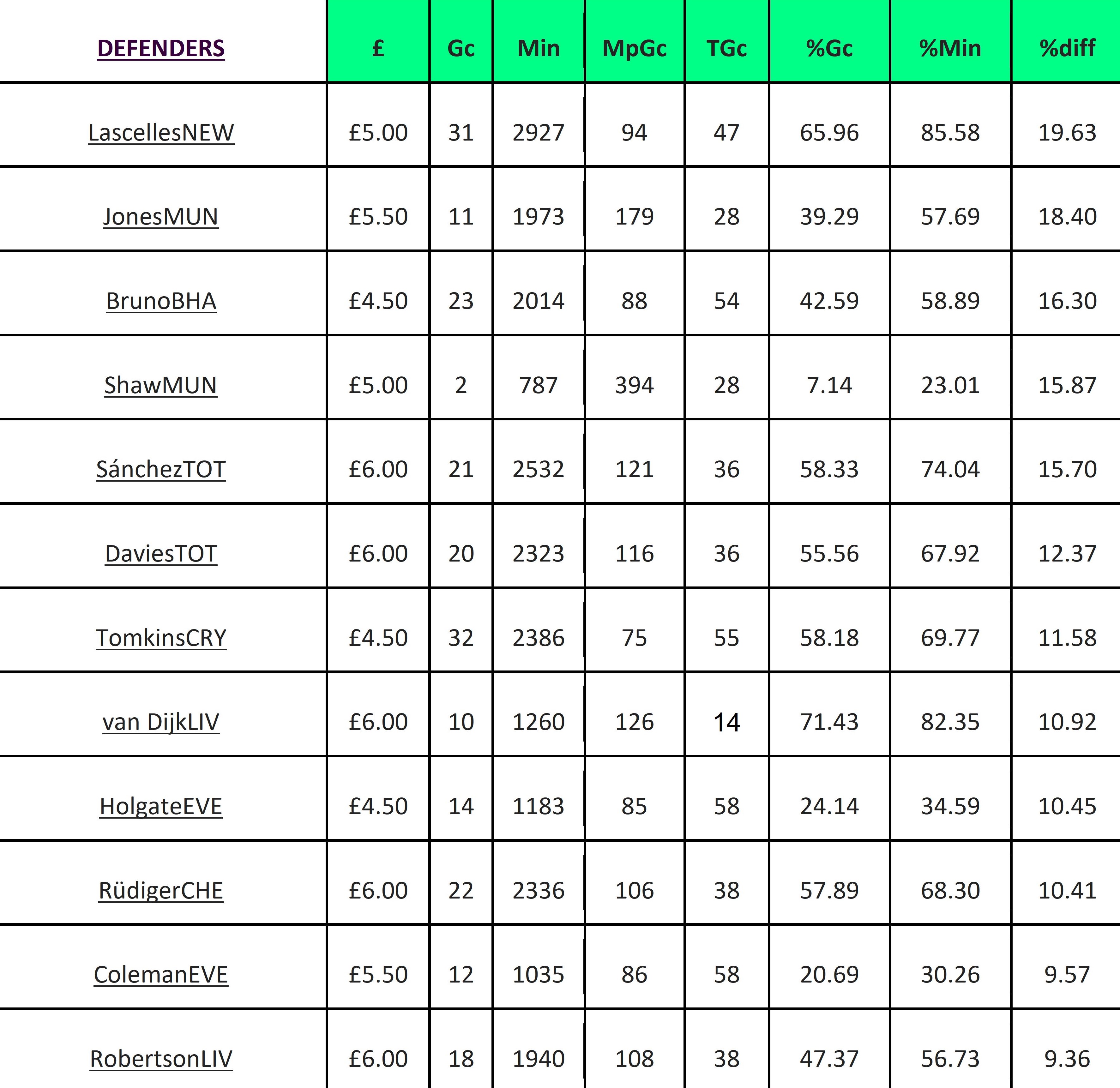 As you can see Lascelles played 86% of Newcastle’s Premier League minutes last season but was only on the pitch for 66% of their goals conceded showing they struggled defensively without him in the side. Utd pair Shaw and Jones both had impressive defensive records but will struggle to command a regular starting role under Mourinho. Sanchez and Davies both did well for Spurs and with Alderweireld and Rose both potentially leaving they may be at less risk of rotation next season. Van Dijk and Robertson had the best records of Liverpool defenders and will no doubt feature in a large proportion of FPL squads come GW1, especially as they both possess attacking potential too. Rudiger started the community shield and could be a good route into the Chelsea defence this season. Tomkins is probably the pick of the 4.5m defenders on the list with his place looking more guaranteed than that of Bruno or Holgate. Palace looked very good defensively under Hodgson last season and if that continues Tomkins could be a steal. Seamus Coleman’s defensive stats were probably boosted by playing under Big Sam last year. Everton have struggled in pre season and may not be as hard to break down under Marco Silva although Coleman will always offer the potential for attacking FPL returns.

The following table shows the players with the biggest negative difference between minutes played and goals conceded. 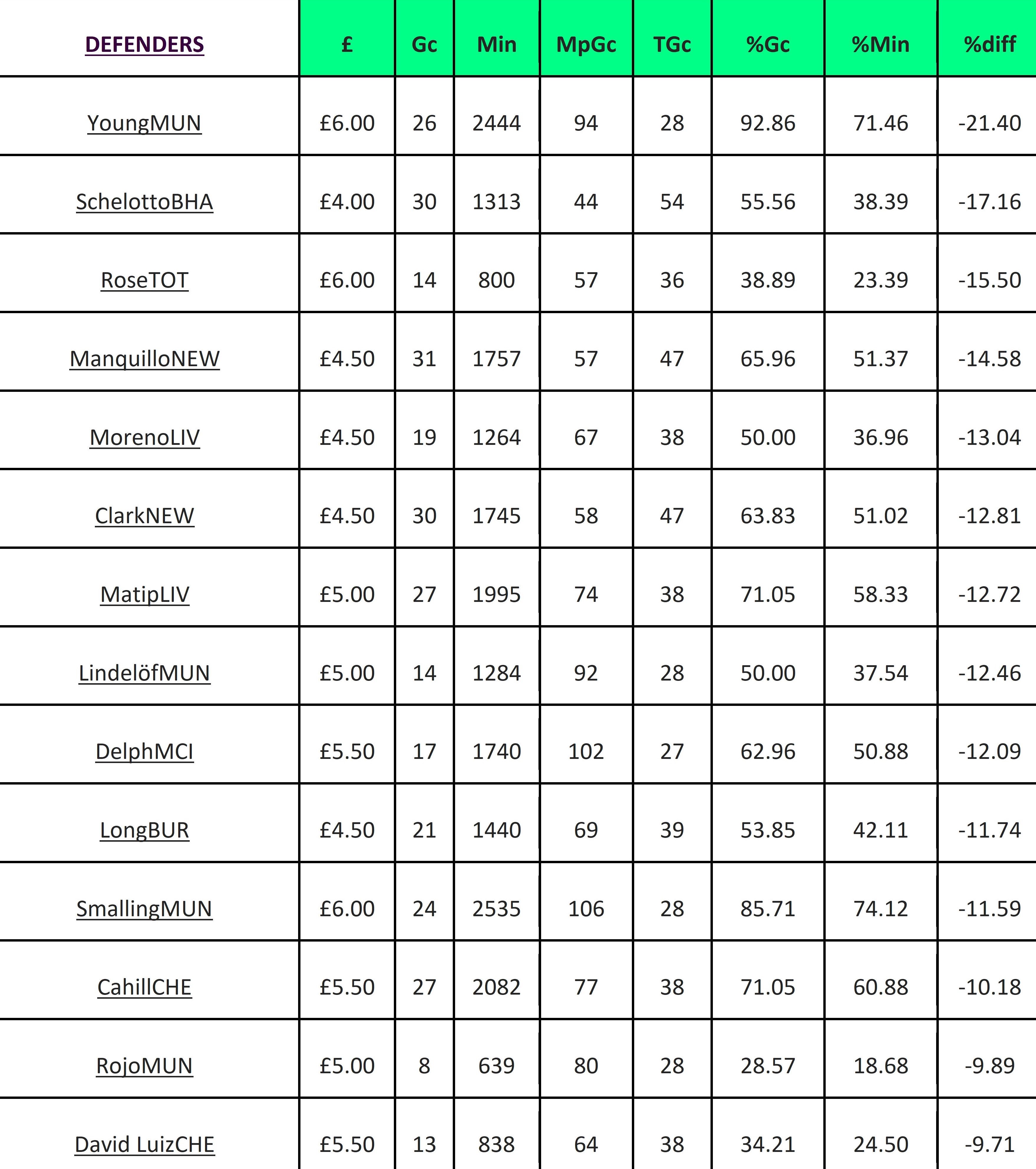 Ashley Young and Fabian Delph have both been reclassified as defenders in FPL this year following extended stints as left backs in 17/18. However, their defensive stats show they were involved in a higher % of goals conceded than % of minutes played, possibly showing they weren’t really suited to playing such an unfamiliar role. The majority of the players in this table look set to continue as understudies this year, with the possible exception of David Luiz, who has made a number of pre-season appearances under new Chelsea boss Sarri. At 5.5m he could be a cheap route into the Chelsea backline, but his defensive shortcomings will undoubtedly put him under pressure at some point this season.

The following table shows the current total ownership percentages for defensive assets from each of the 20 Premier League clubs. 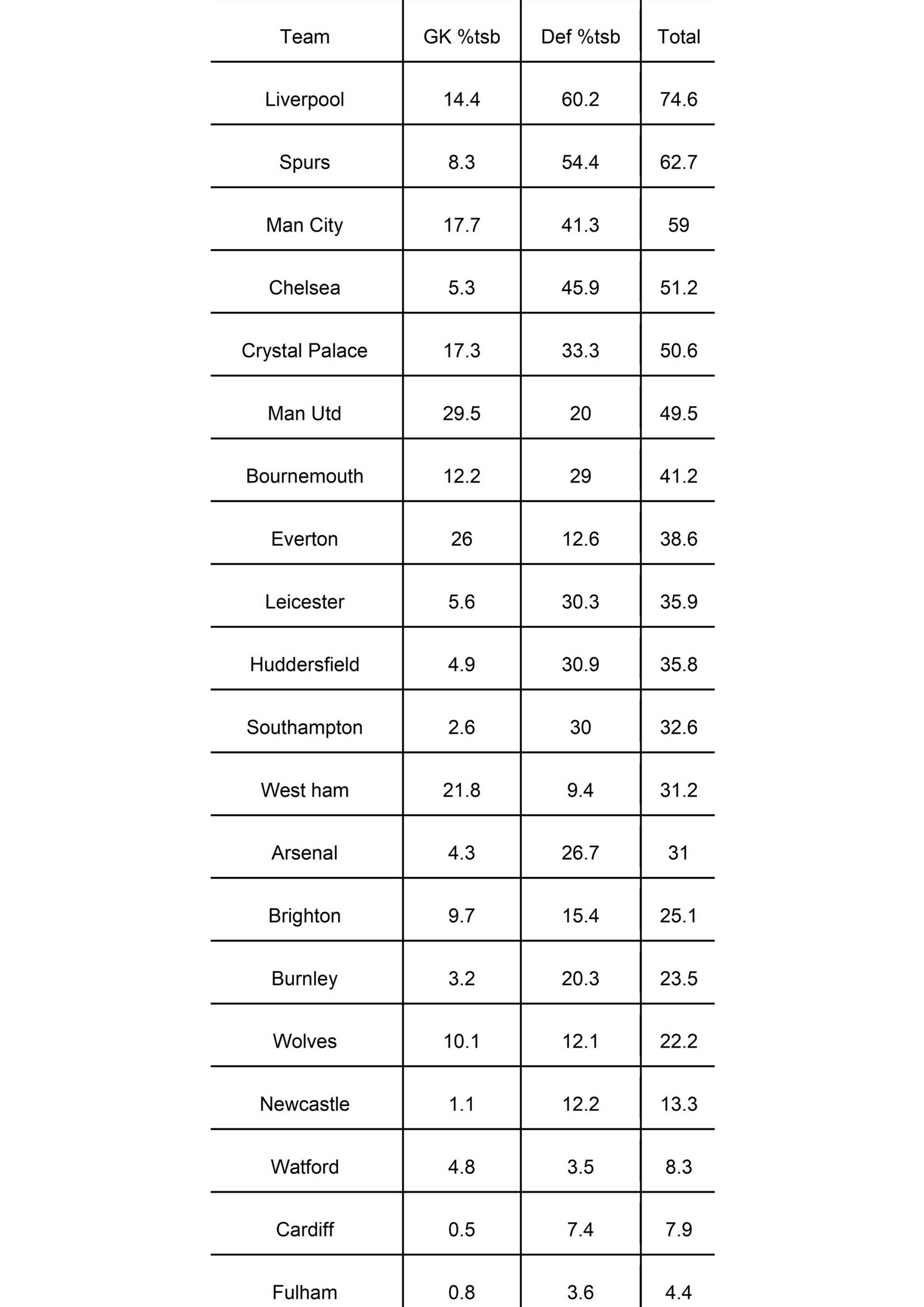 It is hard to draw too many conclusions from the above table because most FPL squads will include 2 or 3 defensive selections that are purely bench fodder. Interestingly Liverpool are out in front by a considerable margin which, given the percentage ownership of Salah and Firmino too, suggests a large majority of FPL managers are starting the season with triple coverage. Bournemouth’s ownership is surprisingly high considering their lack of clean sheets last season whilst Newcastle’s tough start probably explains the lack of investment in them. Any of the three promoted club’s defenders could prove valuable differentials if they get off to a Huddersfieldesque start. They could also be worth looking at for the long term too. @FF_Vader has looked at clean sheet data for the previous 3 Premier League seasons. 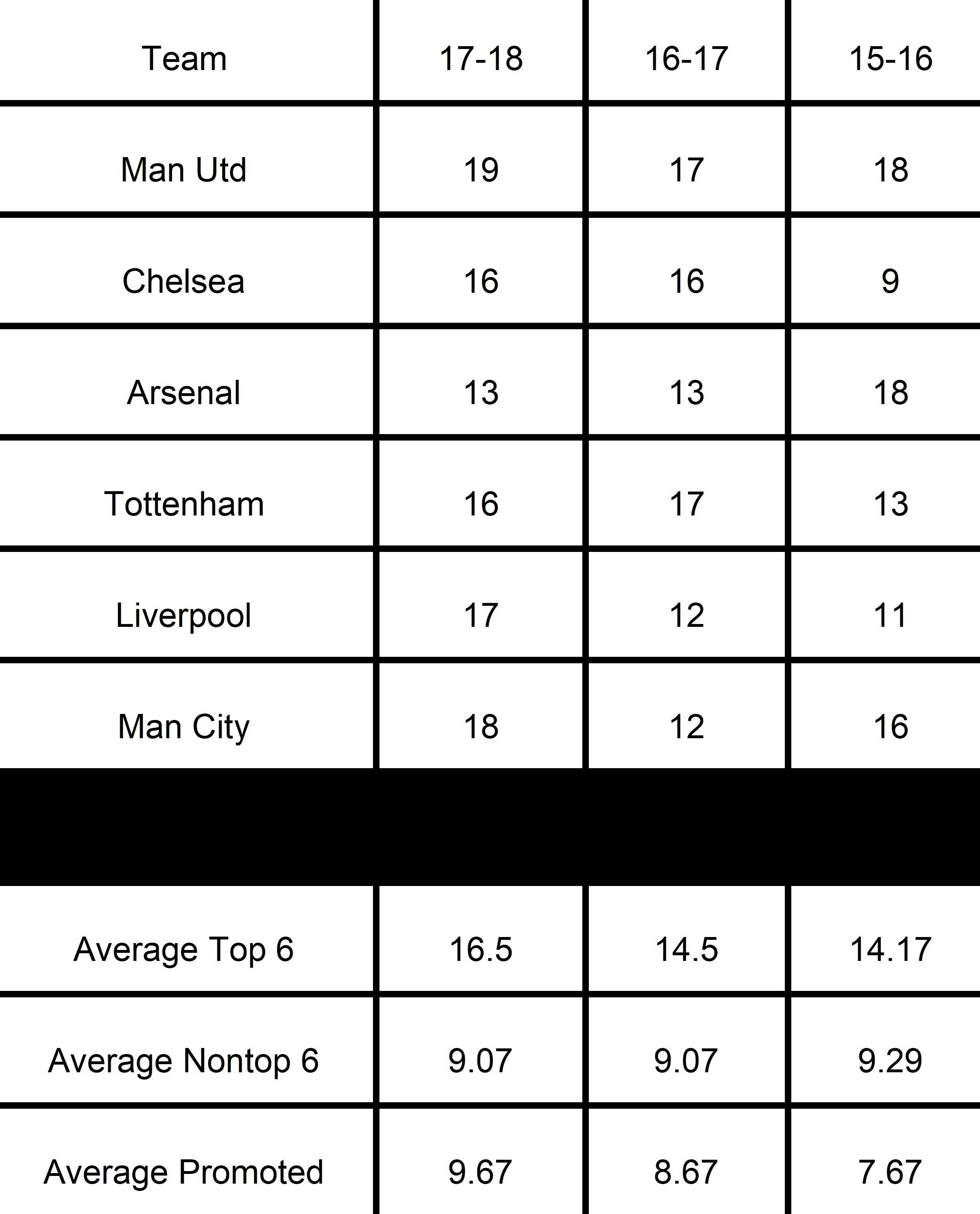 The table shows that the promoted teams average clean sheets isn’t dissimilar to the rest of the teams outside of the top 6 and was actually higher last season. It also shows Man Utd haven’t kept less than 17 clean sheets for 3 seasons which, despite their lack of underlying stats last year, makes betting against them a brave decision.

I’ve looked at a lot of different defensive stats and you could make a case for any number of varying approaches to selecting your squad based on each. For me Liverpool is essential, City is desirable, the rest of the top 6 will probably offer good value and I’ll look for cheap differentials from the promoted sides. Whilst steering well clear of Charlie Daniels and Bournemouth.