FPL Premium Defenders – How to identify the right ones

There has been much talk of premium defenders amongst the FPL community and the value they offer over the course of the season. I like the sound of this tactic so I decided to take a look at seasons gone for some of the highest scoring defenders over the years to see what aspects of the game made them FPL gold.

Big at the back?

It’s very hard to argue against going heavier at the back especially when you compare the scores of the £5.5m-£7.0m defenders with strikers in a similar price bracket. This now seems a better tactic with Premier League managers favouring a shift away from more traditional formations, utilising wingbacks and playing with one striker. 10 defenders have finished above the highest scoring forward in this price bracket (£5.5m-£7.0m) in both of the last two seasons. Prior to that when 4-4-2 was the norm, a cut-price Jamie Vardy was having a party. He banged in 24 goals and provided a further 8 assists in a season where no defenders scored more than his 211 points. However, strikers having a season like that are about as rare as a goal from a Brighton CB.

I have decided not to go too far back as I don’t have all of the data for these players and also I thought with the emergence of a top 6 in the Premier League, the days of Nemanja Vidic or John Terry picking up 23 and 25 clean sheets a season are long gone. I also thought it best not to go too far back as I wanted to keep the data as close as possible to what it is now and move away from when the bonus points were chosen by a man in the stands.

Premium Defenders – What to look for

I trawled through past seasons and looked at the defenders who were challenging as some of the highest scorers in the game over the last number of seasons. This might seem very simple but here’s what I’ve come up with to identify how to get the most bang for your buck… 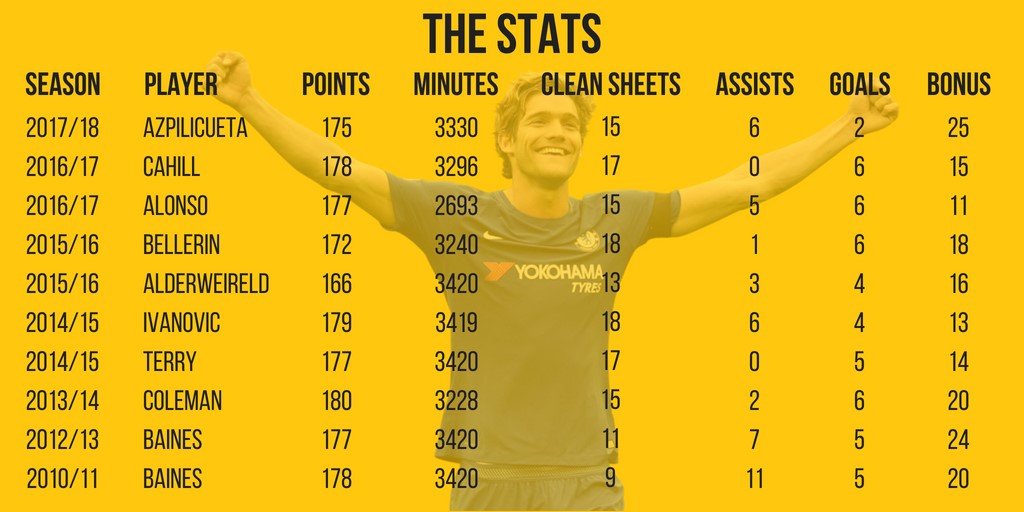 One of the first rules of FPL is pick players who will play and these guys played a lot of minutes! Each of the defenders who scored really well played at least 3200 minutes barring Marcos Alonso who joined after the season had begun. He made up for those minutes elsewhere. Guaranteed starters that will play 35/36 games plus in the season is what you should be looking for. Azpilicueta was the top scoring defender last season and was almost ever-present in the Chelsea defence. While I would love to own one of them from the start or even for the whole season, the rotation risk surrounding both Davies (2323 mins) and Trippier (1912 mins) would put me off.

Most premium defenders play for a top 6 team barring a handful of players. Each of the defenders who posted a big score over the years managed around 15 clean sheets over the course of the season. Leighton Baines has shown that racking up big scores in FPL doesn’t necessarily mean you need to be registering 15 clean sheets if you can make up for those clean sheet points elsewhere. This was a number of seasons ago though so I’d be more inclined to stick to more recent data. Manchester United (19) and Manchester City (18) boasted the best defences in the league last season closely followed by Liverpool (17), Spurs (16) and Chelsea (16). Antonio Valencia and Jan Vertonghen kept the most clean sheets last season however it was their other metrics that let them down in terms of being a really great premium option. For the most part, it’s best to stick to the top 6 as there is more clean sheet potential. There could be some value in the chasing pack of Arsenal and Everton this year given that after poor seasons their defensive options have taken a dip in price. Both sides have reinforced during the summer and have a change in management. Both sides have also previously had a defender posting a high score. Bellerin was the highest scoring defender in the 2016/17 season and both Leighton Baines and Seamus Coleman have also been the highest scoring player in a season.

Again a look at the defenders who scored well in FPL all chipped in with attacking returns whether they be goals or assists. Looking for a player who gets forward, makes a lot of crosses into the box or is on set pieces is something to look out for when choosing a premium defender for your side. Baines back in the day with penalties and set pieces was a gift. More recently Alonso has been the standout performer with 6 goals and 5 assists in the 2016/17 season which made up for his not playing 3000 minutes. Playing in an advanced position and on free kick duties, Alonso was top of the ICT index amongst defenders last season. He may well be in our thoughts if he can push as far forward again this season.

Some players in the game are magnets for bonus points. Cesar Azpilicueta was the king of bonus points last season managing 25. Surprisingly Alonso doesn’t fair as well with bonus points having managed 15 last season and only 11 the season before. Otamendi was second for bonus points with 21 followed by Phil Jones 19. While Otamendi did extremely well last season City have 3 other CB’s competing for a spot so I could see his minutes reduced on what they were on the season just gone.

Out of Position (OOP)

While not key to being a high scoring defender it’s certainly a bonus and we all love a good out of position player in FPL. Alonso was most definitely that man over the last two seasons. Often times he would be playing almost as another striker. I’d see him in the box and think what’s he doing there? It looks like it could come to an end this year though with Sarri reverting to a back four but hopefully that’s not the case. If Spurs play with 3 at the back then Davies and Trippier become options again but there’s always that worry of rotation. It will also be interesting to see if Pep will go back to playing with wingbacks like he did at the start of last season. It would make Mendy a fantastic option but would mean even more rotation in midfield.

So after all that nonsense which players tick all the boxes? While all the top scoring defenders of seasons gone have played over 3200 minutes, Marcos Alonso has shown that making up for that with goals and assists can be done. Baines has also shown that Clean sheets aren’t the be all and end all should the attacking returns make up for the lack of clean sheets. I’ve had a closer look at some stats and picked out 3 players that I think will tick all the boxes.

Robertson made the left back position his own in the second half of the season for and looks nailed on in a Liverpool side with Alberto Moreno his only challenger at Left Back. Minutes ✔

Liverpool kept the third most clean sheets last season (17). Robertson managed 10 clean sheets in 22 appearances and will hopefully add to his tally this coming season with more minutes under his belt. Liverpool has also just bolstered their defence with the signing of Alisson in goal. Clean Sheets ✔

He scored 1 goal and provided 5 assists last term for Liverpool in his 22 appearances. Robertson was second for big chances created with 8. Attacking Threat ✔

Robertson managed 12 bonus points last season which is nowhere near the 25 of Azpilicueta, but that’s to be expected given his limited minutes. With more game time this figure will hopefully be higher.  Bonus Points ✔

His heat map from last season shows that while he doesn’t play OOP he does get forward quite a lot.

Azpilicueta was one of the most nailed on defenders in FPL last season completing 3330 minutes. Only 4 players made more appearances. With the new manager coming in I would monitor him over pre-season to see where he will be playing. Sarri rarely changes his team which is a good thing for us FPL managers. Minutes ✔

The Spaniard scored 2 goals and provided 6 assists last season. Only 3 players made more assists. He created the most big chances among defenders with 11 and the most through balls (10) and was third on the ICT index. While he may not be a huge goal threat he has assist potential.  Attacking Threat ✔

He came out on top for bonus points for defenders last season and recorded 22 bonus points the year before. Top for baseline bonus among defenders Bonus Points ✔ 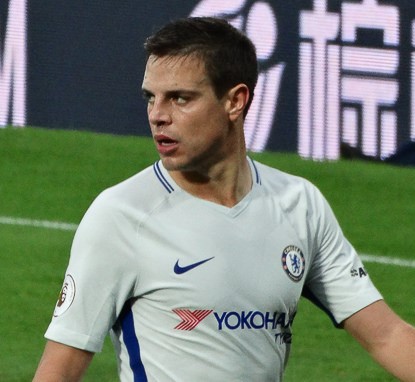 We didn’t get to see much of Mendy last season as a result of his injury early in the season. He now looks to be the starting left back for Man City having already linked up with the team for pre-season despite attending the World Cup with France. It’s hard to see Delph and Danilo really challenge for the LB spot and Zinchenko has been linked to a number of clubs. Minutes ✔

City managed to keep 18 clean sheets last season having only conceded 27 goals in the Premier League. I’d expect a similar number from the champions this season which would see Mendy hitting the target of 15 clean sheets. Clean Sheets ✔

We don’t yet know how Mendy will perform among the bonus points but the potential is there.

We also can only make a guess at Mendy’s attacking potential but going off his last season for Monaco he provided 5 assists in 24 starts. With more minutes in an extremely attacking side, the signs look good. I his 260 minutes last season he had created 9 chances, 1 big chance and took 5 shots.

Should Pep play with Wingbacks again as he did at the beginning of last year then Mendy becomes a must have in my opinion. 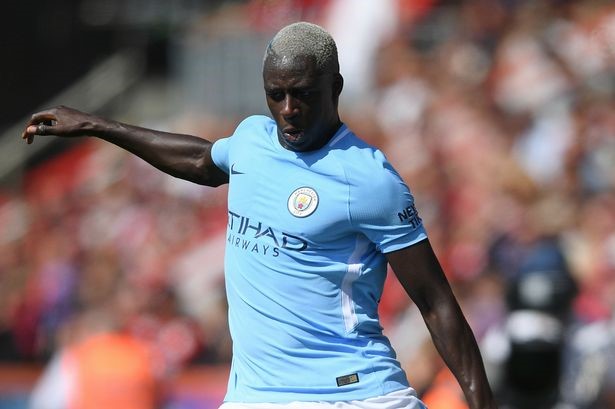