Expected stats can be a contentious issue within the FPL community so if they aren’t of interest to you then this article probably won’t be your cup of xG. Using understats 18/19 data I have calculated the expected FPL attacking returns of each player that played in the Premier League last season. The following example shows how I calculated the expected FPL attacking returns for Mo Salah: 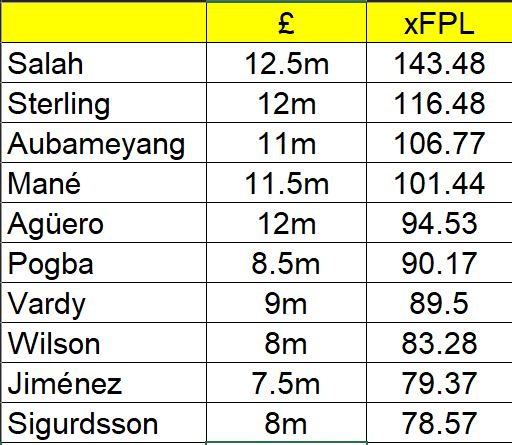 Salah is way out in front for expected attacking FPL returns and will no doubt prove an extremely popular captain pick in GW1 at home to Norwich. Raheem Sterling was the pick of City’s attacking assets last season, comfortably ahead of Sergio Agüero in 5th, and when you factor in his ability to pick up clean sheet points he feels a more sensible use of 12m than the Argentine. Joint golden boot winners Aubameyang and Mané are 3rd and 4th respectively with the latter having a particularly impressive 2nd half of the season that saw him expected to accumulate 61.47 points in attacking FPL returns just shy of his more expensive teammate Salah (63.17). Paul Pogba’s numbers are heavily penalty influenced but if he remains at United and on penalty duties for next season he could provide good value at 8.5m.

The following table shows the top 10 for expected attacking FPL returns per million.

Even adjusted for price Salah offers the best value with 11.48 expected returns per million. Pogba jumps up to 2nd for value but it remains to be seen if he fancies the challenge of turning Man Utd’s fortunes around. The only new names in this table compared to the last are Bournemouth’s attacking duo, Fraser and King, who replace Mané and Agüero. The Cherries enticing opening fixtures will appeal to many FPL managers and selecting the right Bournemouth asset could be the key to getting off to a flying start. 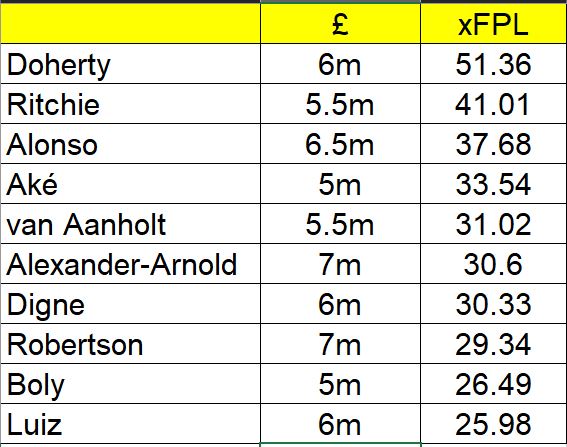 Surprisingly no Liverpool defender features in the top 5 for expected attacking FPL returns last season with Alexander Arnold 6th and Robertson 8th but their incredible clean sheet potential, coupled with attacking returns, will make both very popular set and forget picks this year. Doherty was one of the standout picks last season starting off at 4.5m and had the highest expected attacking FPL returns of any defender. Despite a price rise to 6m this season his expected numbers suggest he could still provide value although Wolves Europa League involvement and current injury concerns likely make him a wait and see FPL wise. Ritchie, Aké and van Aanholt all featured in the top 5 and could be players worth considering when they have a good run of fixtures. Marcos Alonso lost his place last season under Sarri but if he regains a starting role under Lampard he will definitely become an FPL consideration again.

Eight of the top ten players for expected attacking FPL returns took penalties for their clubs last season and with the uncertainty surrounding the introduction of VAR (see my previous article for stats regarding that) it may well be a legitimate tactic to load up on penalty takers for the early part of the season. This feels particularly true with the new handball law coming into effect. Last season there were just 14 penalties given for handball in 380 Premier League matches and, despite Mike Riley’s insistence that Premier League referees will adjudicate differently on handball to their European counterparts, it is hard to envisage VAR officials and repeated slow motion replays not leading to an increase in this number next year. Last season’s Champions League knockout phase (4 in 29 matches) and the recent Women’s World Cup (5 in 52 matches) both featured VAR and the new law resulting in a penalty for handball given on average every 9 games. A similar situation in the Premier League would see a threefold increase in handball penalties next season.

The FPL impact of VAR in the Premier League next season is purely speculation at this stage but selecting a team that could potentially benefit from any upsurge in penalties could be a worthwhile strategy. Michael Oliver awarded 3 of the 14 handball penalties in the Premier League last season, alongside 6 for fouls, so keep an eye on which games he’s appointed to early in the season. There is every chance VAR will have little to no impact FPL wise but it seems prudent to put yourself in a position to take advantage if there is early season penalty chaos.

If anyone would like a copy of the expected attacking FPL returns spreadsheet for every player drop me a message on twitter and I’ll email it across.