In a Galaxy VAR VAR away…

The introduction of VAR and the change to the handball law will undoubtedly be two highly controversial talking points in the Premier League next season. But could they have a significant impact on the FPL landscape?

The Premier League are late to the VAR party with the Bundesliga and Serie A having introduced the technology ahead of their 17/18 seasons and La Liga and Ligue 1 adopting the system prior to last season. The majority of Premier League fans first real introduction to VAR will have been during the 2018 World Cup in Russia which saw an unprecedented level of penalties and has possibly led to a natural presumption that VAR will inevitably see penalty awards sky rocket next year. Looking at the 6 season’s worth of VAR data for the top European leagues it is hard to find any evidence to support this however with no obvious change to the number of penalties awarded or goals scored. La Liga saw 129 penalties last season, an increase of 18 from the previous campaign but the Bundesliga, Serie A and Ligue 1 all saw the number of penalties awarded decrease in their first season of VAR. 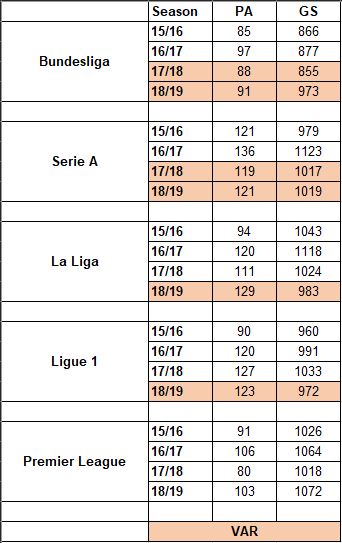 Whilst there is no clear evidence that VAR will see an increase in Premier League penalties next season it stands to reason that the teams most likely to see any benefit from its introduction are those that spend the most time in the opposition’s box. Man City were the clear leaders in this last season with 1588 touches in the opposition’s penalty area. Their title rivals Liverpool recorded more than 300 fewer touches in second with 1236 ahead of Chelsea (1103), Arsenal (1048) and Man Utd (965). Crystal Palace surprisingly complete the top 6 with 962 touches in the opposition’s area.

How referees and VAR officials interpret the terminology “unnatural position” will have a major bearing on the impact that the handball law change has next season. Decisions in the Champions League and Women’s World Cup would suggest any contact with a hand or arm which is away from the body will be penalised next year and that could see penalties given for incidents that previously might have been waved away. FPL credits an assist for players who win a penalty, making those players who cross the ball into the box most regularly the likely beneficiaries if the law change results in additional penalties being awarded for handball. Lucas Digne (280) led the league for crosses last season and on the back of Everton keeping 8 clean sheets in their final 11 games of last season coupled with a favourable opening schedule next season he’ll likely be highly owned on the opening day. Bournemouth’s Ryan Fraser (271) was only just behind Digne and if he is still with the Cherries next year he may also start with high ownership facing newly promoted sides in gameweeks 1 and 2. Many members of the FPL community have mooted a possible reclassification for Matt Ritchie (259) next season to a defender having spent a large part of the season at fullback and any such move would make him an incredible option. The 3 other players to send in more than 200 crosses last season were Holebas (209), Maddison (205) and Alexander-Arnold (201). The latter two are firmly on my watchlist ahead of the 19/20 campaign whilst Holebas’ 33 yellow cards in the previous 3 seasons will likely cause him to be overlooked despite 5 goals and 15 assists in the same period and an explosive start to last season seeing him score 34 points in the opening 4 gameweeks. Crystal Palace’s penalty king Luca Milivojevic was, perhaps surprisingly, the league’s 10th most regular crosser of the ball with 185 last season.

The law changes and introduction of VAR will have a huge impact on Premier League football next season from a fans viewpoint but their FPL implications are harder to ascertain. We won’t get a true idea until the season is underway and we see the way in which they are implemented but the World Cup influenced narrative that VAR equals more penalties may see ownership percentages of penalty takers at unusually high levels when we enter gameweek 1 which could be something to take into consideration regardless of whether you think VAR will actually translate into increased penalty awards.