Anyone who watched Match of the Day last season will have seen them providing xG (expected goals) stats alongside their more traditional output. It is a stat that has been ridiculed by Jeff Stelling and others within football media but for the keen FPL manager it could prove crucial. The average gameweek involves 15+ hours of Premier League football. It is improbable that anyone is committed enough to watch every minute and the highlights shows put us at the mercy of the editors with an inevitable bias towards the top clubs. The xG and xA (expected assists) data gives us an overview of which players are getting into positions that make them most likely to score FPL points. xG assigns a probability to each chance in a game based on how likely a player of average ability in the league is to score from there.

I’ve taken last season’s xG and xA data from understat.com and translated that into expected attacking FPL points (xA multiplied by 3, xG multiplied by 4/5/6 depending on position). Appearance and Bonus points are excluded so if we take Mo Salah as an example:

Giving an xFPL of 151 attacking points. 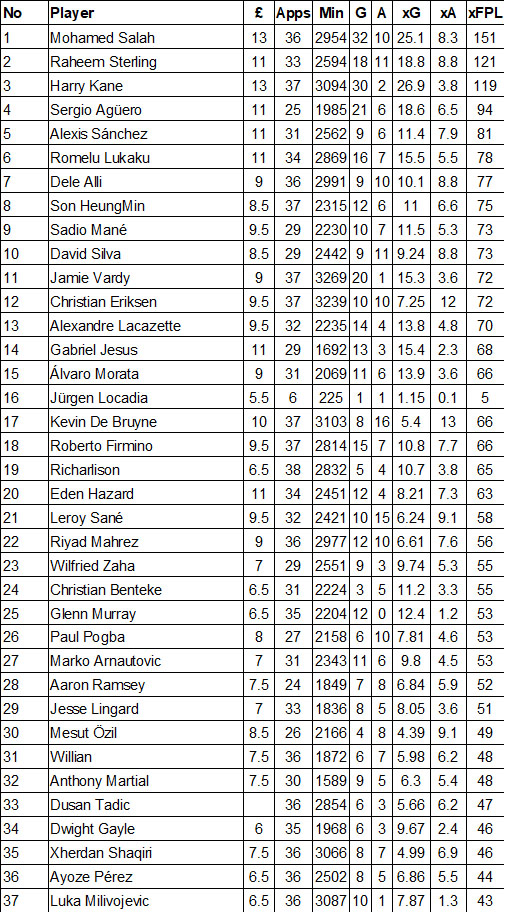 Last season’s top 2 points scorers, Salah and Sterling, are still the two best value players for xFPL points per million despite their inflated prices. Richarlison’s 10.66 xG was more than double his actual goal return putting him in 3rd place and a reunion with Marco Silva at Everton could make him a FPL must have if he starts to convert more of his chances. Harry Kane had the highest xG last season and is 4th for xFPL/£m ahead of teammates Son and Alli. City pair David Silva and Agüero are next before Benteke and Murray round out the top 10. Benteke had 11.17 xG but only scored 3 goals last season. Arnautovic and Zaha both feature in the top 20 for value despite their reclassification as forwards resulting in 1 point less per goal. Tom Ince probably isn’t on many FPL manager’s radars but priced at just £5 million and with 6.73 xG last season he could be a good option for the 5th midfielder spot if he remains at Huddersfield. 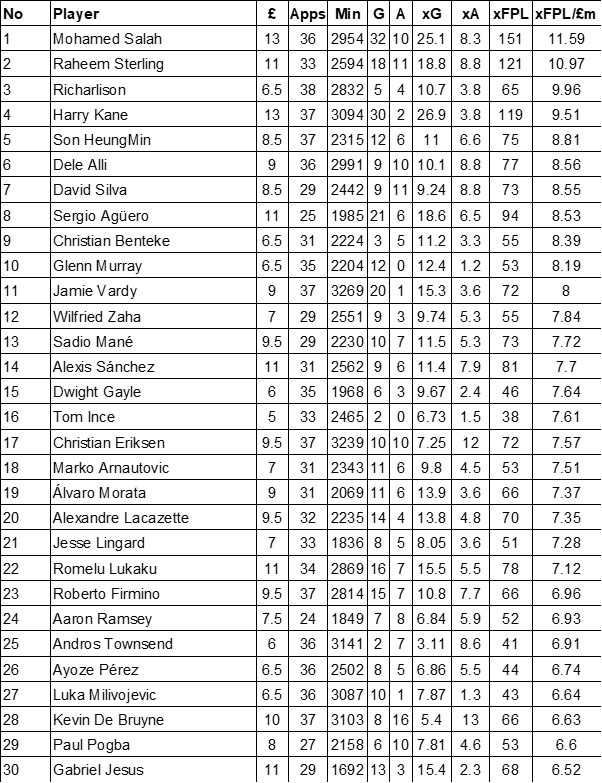 Kolasinac is the top defender and his team mate Bellerín is 3rd. Either could offer good value if they are regular starters under Unai Emery. Planet #FPL’s Arsenal correspondent @ThreeFiveWho has highlighted Bellerín as someone who could benefit under the new manager so worth keeping an eye on. Chelsea’s wingbacks might be a thing of the past following the departure of Antonio Conte which could potentially have an impact on the stats of Alonso and Moses. Maurizio Sarri prefers a back four so if either is deployed at full back they will assume greater defensive responsibility although both have the attacking talent to potentially be considered for a more advanced role. Brighton’s centre back pairing of Dunk and Duffy had a combined xG of 5.39 but only scored 1 goal between them. Neither is renowned for attacking intent from open play so this would suggest there is potential for Pascal Groß, Brighton’s predominant set piece taker, to improve upon his impressive numbers from last season.

Adjusting the data to allow for minutes played puts Niasse top of the list but with little indication his minutes will increase next season he’s unlikely to be a fantasy asset. Charlie Austin in 2nd could be of more interest if he can stay fit given he’s probably Southampton’s first choice striker and is a proven goalscorer with a Premier League goal for every 164 minutes played. Agüero and Sterling both still feature highly but predicting their minutes as part of such a talented City squad is difficult. However given that Sterling is currently only the 39th highest owned midfielder in FPL (3.5%TSB) he could be a huge differential this season. Martial and Lingard had good numbers in their limited minutes last season but neither look like being first choice under Mourinho so have limited long term fantasy appeal. Martial could be worth an early season punt as Lukaku, Pogba, Lingard and Rashford all look unlikely to be available for gameweek 1 due to their World Cup exploits. Unai Emery has stated Ramsey is crucial to his plans at Arsenal so if he can improve his injury record he could be essential at £7.5 million. Aubameyang had an expected FPL return of 40 attacking points in just 13 appearances last season which makes him hard to overlook even at £11 million. Chelsea pair Morata and Willian could be of interest if they are able to cement a place in Sarri’s team. Kenedy, Stanislas and Walcott could all play significantly more minutes this season than last making them attractively priced options. 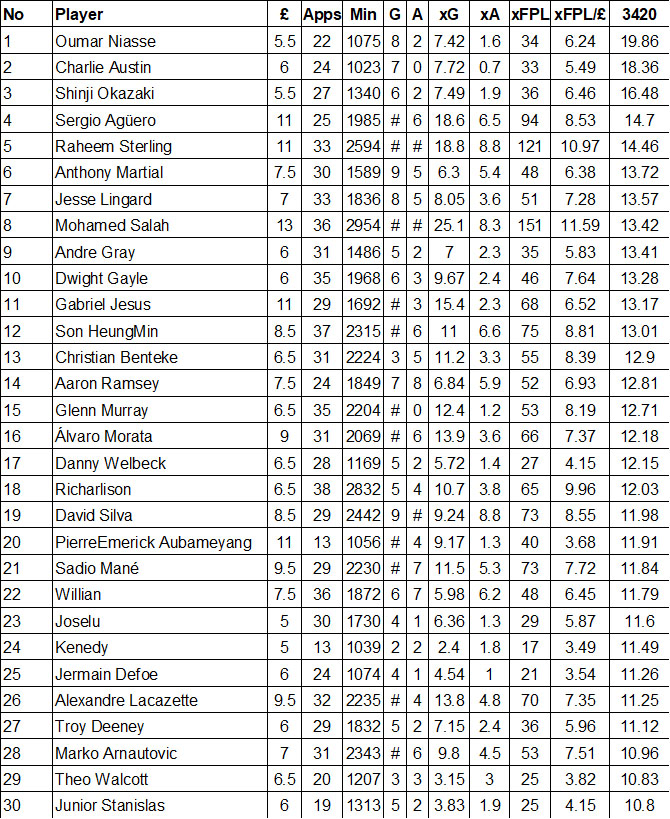 Kolasinac remains the top defender when adjusted to minutes played so it will be interesting to see how many minutes he gets in preseason. Everton duo Baines and Coleman both feature in the top 10 and Coleman especially looks good value in what could be a more attacking Everton side this season under Marco Silva. Baines’ set piece delivery is still impressive but at 33 years old his place in the team could come under threat this season. Alexander-Arnold is well priced at £5 million but competition from Clyne and Gomez coupled with Klopp’s willingness to rotate may limit his minutes.

Stats are a key weapon in the armoury of the keen FPL manager, adding some FPL context to the available data hopefully enhances that. We will still debate whether Hazard is a troll or a potential captain, whether Salah can replicate last season, whether James Ward-Prowse will ever realise his fantasy potential (ok, maybe that’s just me) but possibly from a more informed perspective. In forthcoming articles I will try to take a look at defensive FPL returns and also how “Pep Roulette” may impact our teams this season.