Last season 95 Premier League goals fired Man City to the title. It would only make sense to go into this upcoming season with at least one of their attacking players. Both Sergio Agüero and Raheem Sterling have been priced at £12m. Aguero is currently owned by just over 20% of managers while Sterling has just over 30%. Assuming you can only own one I’ve taken a look at the pair to see which of the two looks the best choice.

The problem with owning Man City assets is the risk of rotation. Pep has an array of attacking assets ready to bring in at any moment. Last seasons minutes for Agüero and Sterling are as follows:

Sterling played over 300 minutes more than Agüero and didn’t feature in only 3 games. When he didn’t play he generally didn’t come on meaning you were rarely left with a 1pt cameo from the Englishman.

Agüero played as the main striker last season but was subbed off on 23 occasions, mostly around the 60minute mark. A look back at his previous seasons and he has only surpassed 2500 minutes once, back in the 2014/15 season.

Both players surpassed the 200 point mark last season. Sterling had the higher points tally than Agüero:

Despite being the second highest scoring forward in FPL it was Sterling who amassed more points than his teammate.

Sterling has been consistent in the past two seasons having bettered his total from the season before (229) by 5 points.

In comparison Agüero has only broken the 200 point mark on two occasions, this year (201) and in the 2014/15 season where he recorded 216 points. This also happens to be the season Agüero managed over 2500 minutes.

This was most evident in Man City’s game against Chelsea last season. Agüero scored a hat-trick and took the three bonus points in a 17 point haul. It was Sterling however who had more points due to two extra points for his two goals and a clean sheet point to go along with an assist and 2 bonus for a score of 18.

Double digit hauls for one of your attacking players can result in a huge green arrow or prevent a red arrow. One that comes to mind is Agüero’s 20 pointer in GW2 last season.

For this I’m going to categorise a blank as anytime a player doesn’t manage an attacking return (goal or assist). If the player doesn’t play any minutes in a gameweek this will not be counted as a blank.

Agüero comes out on top in this one with only 10 blanks to Sterling’s 12. While he didn’t provide as many double digit hauls as Sterling he ticked along nicely with goals and assists.  It must be noted that Agüero played in one game less than Sterling. It’s impressive that he managed an attacking return in so many games given that he often came off around the 60 minute mark. 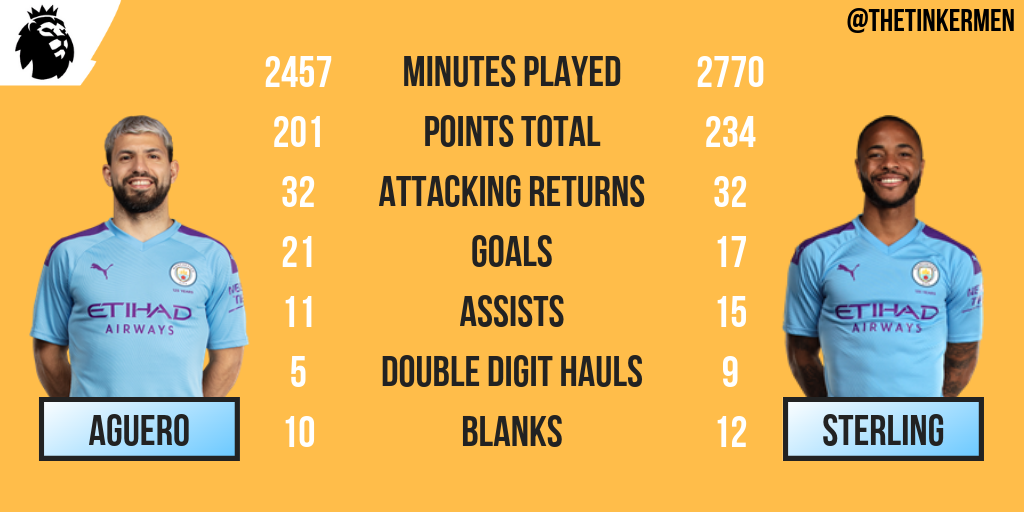 If I was given 12m to spend on a Man City Attacking asset my money would be going on Sterling. If I thought Agüero would play more minutes then I’d probably go for him. It’s Sterling’s game time as well as his explosiveness that appeal to me. The extra points for a goal and clean sheet make the difference as well and in my opinion Sterling is a no brainer.