In this article I’ll be analysing Newcastle FPL assets ahead of the tasty toon fixture swing.

Almost all FPL transfer decisions come down to form versus fixture. Usually the deciding factor is somewhere in between. Rarely has there been more of a black and white contrast between Newcastle United’s past form and future points potential.

Our Season So Far…

In my pre-season Newcastle preview, I predicted “no one would be surprised if we were winless heading into the winter months”. Well here are, eight games in and a paltry two points on the board. 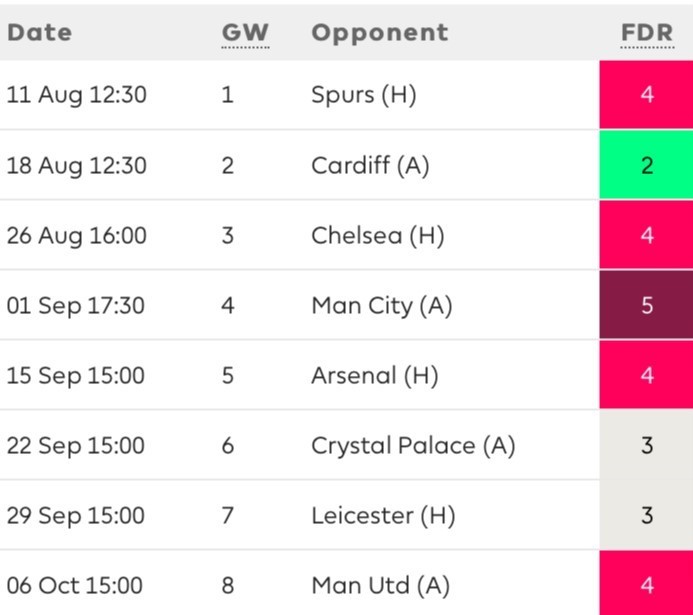 Facing an average (Fixture Difficulty Rating (FDR) of close to 4 out of 5 – Newcastle’s general attacking play and FPL returns are where you would expect them to be:

Defensively, there is slightly more cause for optimism. Only six teams have recorded more than our two clean sheets to date. We’ve done an adequate job of limiting big chances against superior opponents, if not shots at our goal:

The lack of FPL points has led to over one million transfers out so far this season, more than double the transfers in. Here are the noteworthy Newcastle price drops:

Player prices continue to recalibrate to more reasonably priced assets, just in time for them to be considered as FPL options, for arguably the best run of fixtures any team will have this season. Newcastle now don’t play an established top six side until gameweek 19. 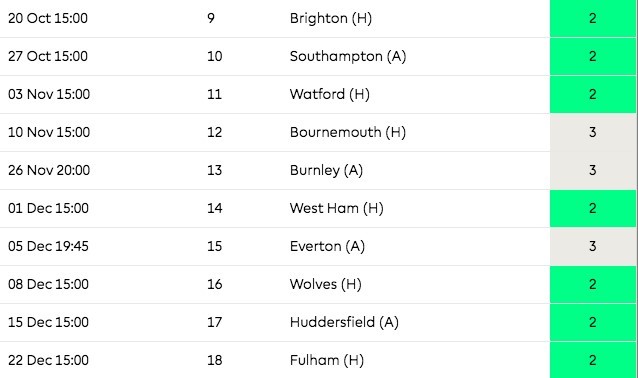 What To Do On A Wildcard…

International breaks are a popular time to pop the wildcard. Currently floating outside the top 100k, I have activated mine. Even after a positive display against a Manchester United side that was there for the taking, I haven’t seen enough from my team, either individually or collectively, to lock in a Newcastle player an automatic spot in my fifteen man wildcard squad. At first glance, it’s impossible to ignore the better value and proven form on offer around the league.

The advantage of being on a wildcard is that you can work a Newcastle player into your team as a solid ‘11th player option’; either as a fourth defender, fifth midfielder going big across the middle, or taking a wildcard gamble on a differential third attacker. Promoting a Newcastle pick to anything above your lowest expectation for points during this run is not advised.

If you are not on a wildcard, I would recommend closely monitoring Newcastle players over the next two fixtures. Investment before gameweek 11 would still give you three home games in four, should our form turnaround against Brighton (h) and Southampton (a).

If you are reading this then you’ve probably already listened to James and Suj talk up (or down) Newcastle’s prospects on their gameweek nine preview pod. They have also polled Twitter to see what the most popular attacking and defensive picks are. 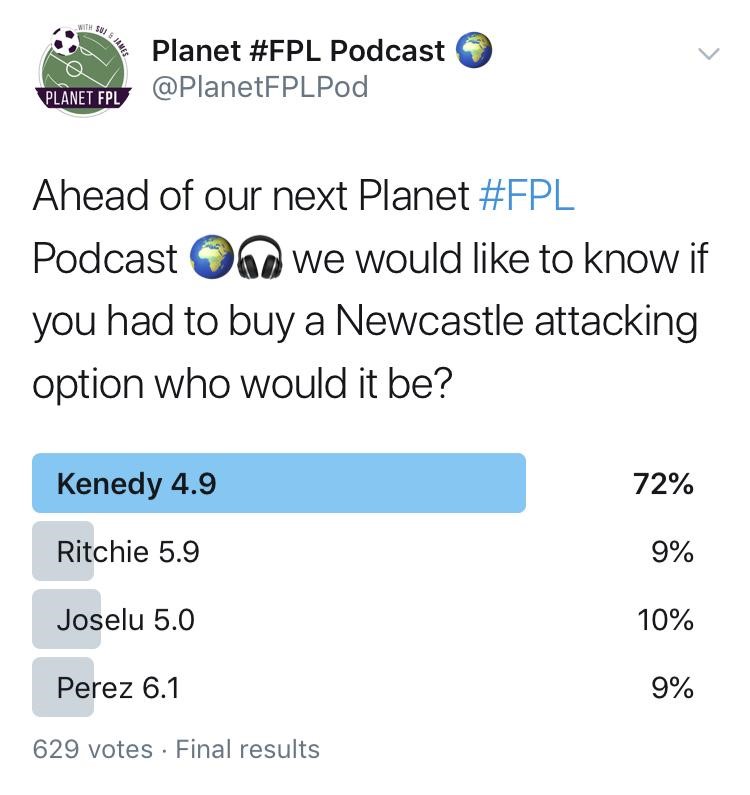 Unsurprisingly, the cheapest option, Kenedy, came out on top for attacking popularity. His budget price and well-taken goal against Man. Utd the main factors in his landslide lead. I’m still waiting for him to produce on a consistent basis in a Newcastle shirt. As a fifth midfielder, he’s a decent price but may end up costing you defender points sitting on your bench if you decide to go for him.

It’s hard to read too much into stats given our tough run of fixtures, but to date, he has created 0 big chances for his teammates and puts in one cross a game. You are relying on him to score goals and he’ll need to up his 0.4 shots on target per game this season to come close to being a regular FPL points returner. He’ll have a purple patch at some point this season, I’m just not sure it will coincide with the next couple of fixtures. Recommendation: Watchlist Wait and See

My pick of Newcastle’s attackers would be Matt Ritchie. At £5.9m, the ex-Cherry man could be a savvy Fraser replacement if the Bournemouth midfielder is ruled out through injury this weekend. Ritchie is matching his fellow Scot for crosses and corner involvement, remaining Newcastle’s most likely source of midfield points. Recommendation: A decent punt if you have no pressing problems

Mid-priced strikers are in demand, which makes it hard to back our front line over more popular and prolific attackers across the league. Having scored in his first start for the Club, I’m considering Muto as a third choice striker, who at £5.7m is in the same price bracket as Jimenez and Ings. In limited minutes this season, he’s won a penalty (which Kenedy missed) and should have braced at Old Trafford. It remains to be seen if Rafa will pick him alongside Perez at home when there is less space to play a counter attacking game plan. Recommendation: A kamikazee differential that only a Newcastle fan would consider buying

One interesting stat I noticed in Perez’s favour, his minutes per BPS is currently better than Callum Wilson, suggesting he could be on for bonus points if he produces steady returns. Recommendation: Perez notched his first FPL return in his last game and tends to get points in patches, keep an eye on Ayoze this weekend. 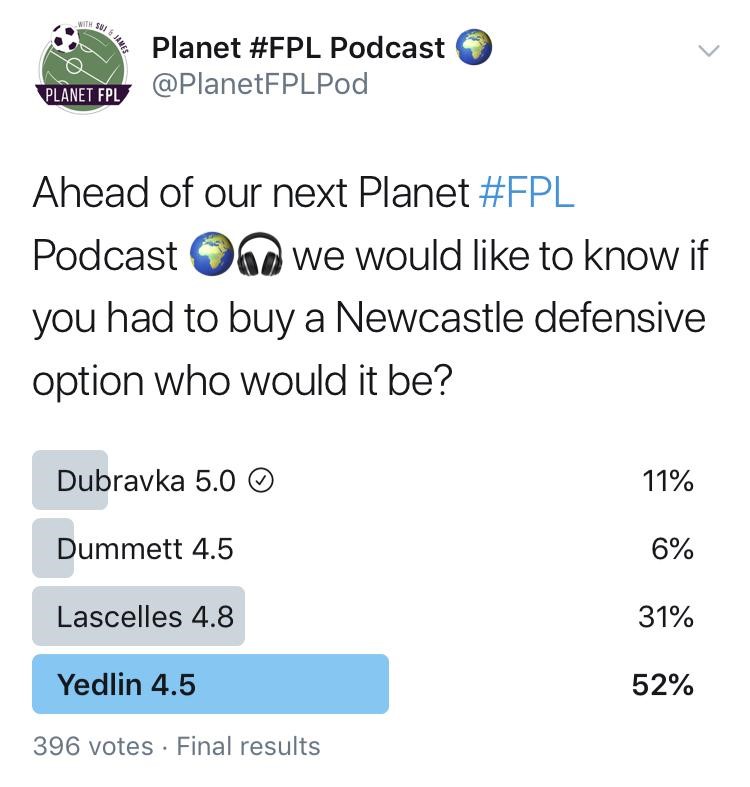 Having scored, assisted, been credited with an own goal and left a game on crutches, DeAndre Yedlin has had an eventful start to the campaign. With the exception of Jonny, he’s arguably the most attractive player still at £4.5m in the game. Despite the attacking returns, Lascelles has one more FPL point than the American. I would definitely recommend investing the extra money in our Club captain. Recommendation: Decent option if you need a £4.5m defender and already have Doherty, AWB and don’t like Duffy.

Lascelles was the top scoring £4.5m defender in the game last season and if he’s fit, he will chip in with a few goals, get more bonus points and generally marshall us through what are likely to be tight and low scoring games during this run. He is the ideal fourth defender in a 4-4-2 setup, that should return more value than his attacking counterparts at a similar price in midfield  and potentially £1-2m more up top. If you are looking for a way to get three to four big hitters in your team, Jamaal could be the gem you are looking for. Recommendation: The best option for the majority of FPL managers.

Having said all that, the player I expect to score the most points for Newcastle during this sea of green games is our goalkeeper, Dubravka. He’s averaging over three saves per game, which I don’t see declining massively given how frequently we are giving up shots at our goal. With Lejeune out injured and Schaar not starting games, he has the best ball distribution stats across our backline, delivering 8.9 accurate long balls a game. His ownership is 0.5%, making him the 30th most owned FPL keeper. The main reason for that is his awkward £5m price tag. I’m giving serious consideration to picking him on my wildcard as a set and forget over the more expensive Premium keepers, rotation headache of two £4.5m keepers or the Patricio-Doherty Wolves double up. Recommendation: A wildcard only selection that frees up a defensive slot and lends itself to a three man premium defence.

Having compiled lots of non-impressive team and player stats for the first eight games of the season, I’ll be analysing how Newcastle get on in their next two games. If they turn their season around, I’ll post a more stats heavy article. If we remain winless after 10 games, I’ll have bigger things to worry about than my next FPL blog :/