Before I get into the article I would like to address the Elephant in the room, John Lundstram. Blades fans and I don’t hate Lundstam we are over the moon that he is playing so well and scored the winner on Sunday. The reason why we said Lundstram wouldn’t start is because he hardly played last year in the championship and we have signed 4 new CMs all competing for the same position. I am not Chris Wilder and I don’t know what the team will be, I am just making an educated guess. I stand by my last article that Lundstram won’t be a mainstay in the Blades midfield later in the season but with Fleck currently injured I believe Lundstram will start the next two games before the international break and I brought him into my FPL team this week.

John Lundstram the living FPL legend scored the only goal of the game, to give the Blades their first Premier League win in 12 years. We kept the same starting lineup has GW1 to the surprise of many of the Blades fanbase, Lundstram starting over Luke Freeman again and we kept the flat 3-man midfield. Fleck went off injured in the 29th minute and was replaced by Luke Freeman who was fantastic.

Here is the Blades average position from the Palace Game, look how far forward Stevens and Baldock are throughout the game.

The Blades goal was a well worked move down the left-hand side and a great example of the Overlapping CBs and our positional rotation. McGoldrick drops back to LCB position to pick up the ball, O’Connell overlaps down the left receives the ball, Stevens moves into the striker position to receive the ball from O’Connell, Freeman then darts forward cutting inside the full back before shooting at goal, it is well saved by Guaita but it falls to Lundstram who has got in the box who then smashes it home from 8 yards. Great goal for the Blades and very difficult for the other team to defend the overload and positional rotations. 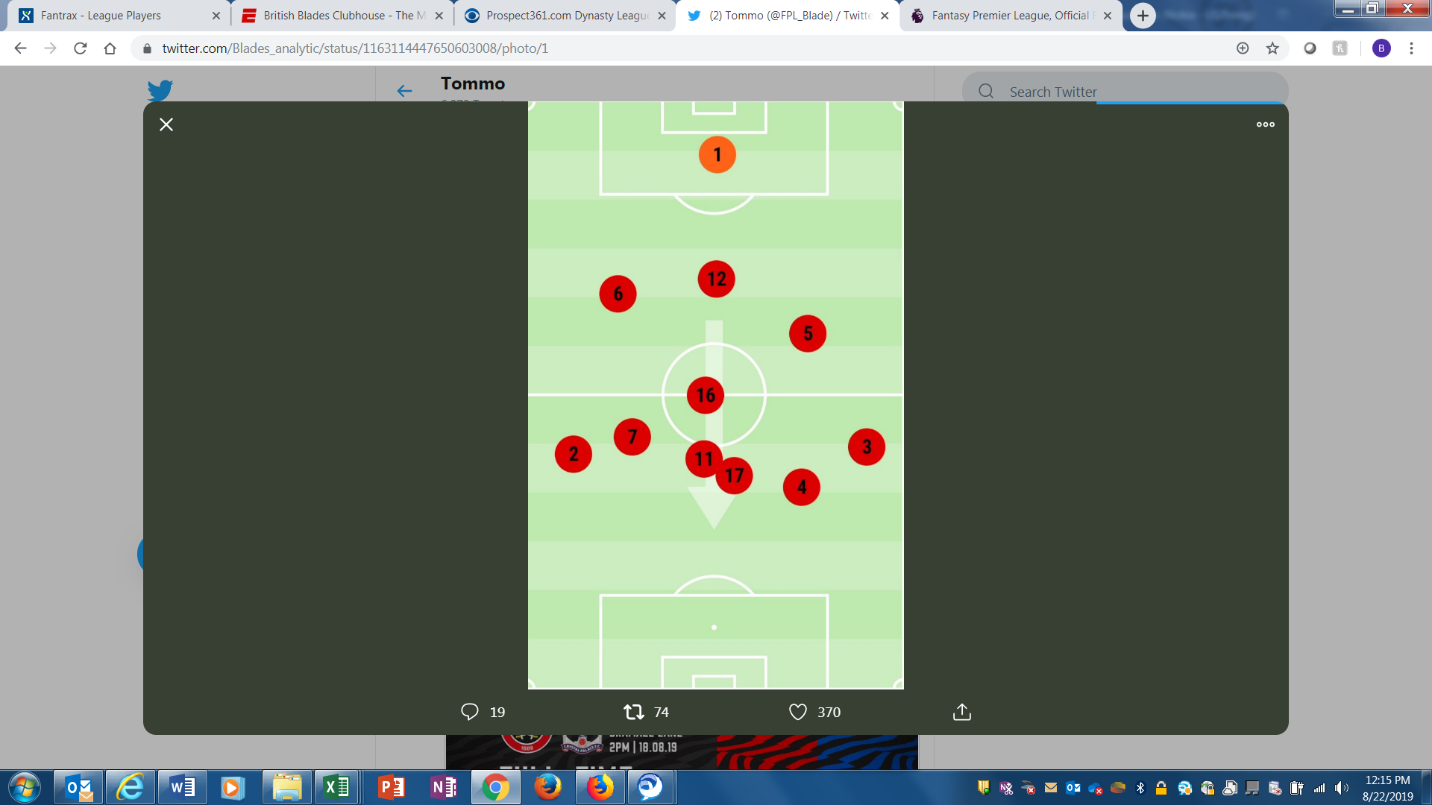 A few things I wanted to add, the referee called soft fouls anytime the ball went near Zaha and protected him throughout the game. Then how the referee gave 7 mins of stoppage time, I will never know where he got that much stoppage time from. I am glad we held on for the win because there would have been a lot of controversy if Palace scored in stoppage time.

Henderson – 9 Points : Made 4 easy saves getting the save BPS, he got a CS and 2 bonus points. Looks a great option at 4.5M we do have some tough fixtures coming up, but I do see Henderson getting save points and he can save a pen any given week.

O’Connell – 6 Points: Rock solid has always, had a good chance to score with a header saved by Guaita and was a threat overlapping down the wing. One to watch at 4.5M

Egan – 6 Points: Rock solid had Benteke in his pocket, he doesn’t have much attacking threat so don’t see any FPL value for now.

Stevens – 7 Points: ENDA STEVENS what a player, yes he’s 5M but I don’t care, he will be in my team on the Wild Card, I can see Matt Doherty returns coming for Stevens this season.

Baldock – 5 Points: His best game for the Blades I was a little worried he wouldn’t make the step up but he’s been fantastic. He still needs to improve going forward but one to watch in FPL.

Norwood – 3 Points: Norwood was my MOM he was instrumental to everything the Blades do. He hit one of the best cross field passes I have ever seen, please check out my Twitter profile to see the pass. Norwood is a threat from set pieces and looks good value as a 5M enabler this season.

Lundstram – 14 Points: MOM the living FPL Legend was fantastic from the first minute to the last minute, scoring the only goal of the game and he also created the best chance of the game which I still can’t believe McGoldrick missed. He now looks nailed on to start the next two games with John Fleck’s injury. I brought Lundstram in and he is a must have for those FPL managers who are wild carding.

Fleck – 1 Point: Went off injured in 29th minute did ok when he was on the pitch, likely to be out till after International break GW5.

Robinson – 1 Point: Robinson was so unlucky not to score more points, he went off with cramp and fatigue so only got one point. He looked lively in the first half and had two half chances. He was a few feet away from a tap in for Lundstram goal very unlucky. Wilder said he is fine for the weekend and he has been training all week I expect him to keep his place.

McGoldrick – 2 Points: McGoldrick worked hard like always and links the play so well but he has to take his chances, I still can’t believe he missed from 3 yards he needs to score, or he will be replaced by McBurnie or Sharp in the team. I would stay away from McGoldrick with our crowded front line.

L Freeman – 2 Points: Played 61 minutes after Flecks injury and he changed the game when he came on running forward carrying the ball creating chances. 5.5M one to watch once he gets in the team each week.

Oliver McBurnie – 1 Point: McBurnie went to the Swansea game midweek with the Swansea fans on a full bender in Stone Island gear, what a legend. He looked a handful when he came on and I see him starting very soon. 6M one to watch.

Phil Jagielka – 1 Point: came on for the last few mins defensive replacement, I don’t see him getting into team unless there is an injury.

I expect a very tough game on Saturday against a strong Leicester team who will be pushing for top 6 finish this season. Blades will make it difficult for Leicester and hopefully we can keep Vardy quiet. I am going to go with a very optimistic 1-1 draw, but I could see us losing this game 2-1. 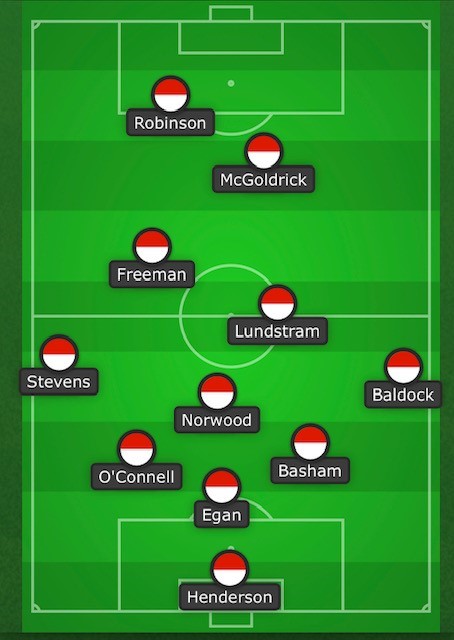 My Predicted Lineup: (PLEASE REMEMBER I AM NOT CHRIS WILDER AND I DO NOT KNOW THE TEAM)

Henderson and the back 5 will likely stay the same, unless there is a unforeseen issue in training or off the field.

Since Fleck is likely to miss out due to injury I can see us starting with Norwood, Lundstram and Luke Freeman in the middle 3 with Freeman starting a little more advanced than Fleck.

Up front its tough, Robinson has trained all week and Wilder was talking him up in the press conference. I can see us starting with Robinson and McGoldrick again, but I am not confident. McBurnie and Sharp will be banging on Wilders door for a start.