Team of the 2nd Half of the Season

Came into the team due to an injury to Cech in GW6 and kept his place throughout the remainder of the league campaign. Despite a distinct lack of clean sheets Leno scored just 7 fewer points than Alisson for the second half of the season and any kind of defensive improvement for Arsenal, which will surely be a priority for Emery, could easily see Leno reach 150+ points next season.

Former FPL favourite Coleman missed the majority of the 17/18 campaign and made a slow start on his return with 38 points from 15 appearances in the first half of this season. However a recent post match interview following the Burnley game suggested Marco Silva had tried and failed in attempts to curb Coleman’s natural attacking instincts and a goal plus 2 assists in the second half of the season actually saw him outscore his more heralded teammate Lucas Digne in the second half of the season. With a price hike anticipated for Digne next season it could make Coleman an interesting alternative.

Everton closed out the season with 8 clean sheets in 11 games and the on loan Chelsea centreback played a major role in this increased defensive rigidity. Whether the toffees are able to secure his services again for next season will have a major bearing not only on Zouma’s FPL prospects but also Everton’s ability defensively.

Laporte cemented himself in FPL folklore this season with his 3 DGW performances producing 53 points. City have kept 38 clean sheets over the last two seasons and Laporte’s second half of the season performance suggests he could compete with the Liverpool defenders FPL totals next season which would make him an appealing set and forget, especially with him being as yet unburdened with international football and therefore less likely to fall foul of Pep roulette.

Mané has undoubtedly been one of the stars of the FPL season as a whole but his second half of the season was particularly impressive, amassing 135 points at an average of 7.1 per match and hitting double figures 5 times. He emerged from Salah’s considerable FPL shadow and a decision between the two may well be one of the major pre season conundrums.

One of the stars of Wolves’ promotion winning campaign, Jota seemingly struggled to initially adapt to the Premier League and 25 points from the opening 14 gameweeks led many FPL managers to ditch him. However the second half of the season saw him find his feet and he was the 6th highest scoring midfielder for this period with 91 points behind only Mané (135), Salah (122), Sterling (118), Hazard (105) and Pogba (100). Wolves will be targeting a top 6 finish next season although their potential Europa League qualification, via a City win this evening, would certainly cause plenty of FPL headaches.

Mainly included as the poster boy for ManChild’s improbable and ultimately unsuccessful pursuit of Suj. However an average of more than 4 FPL points per match in the second half of the season is impressive for a player that didn’t rise above 4.6m this season.

West Ham’s captain averaged less than 2 points per match for the first half of the season but more than doubled that for the second half. The introduction of VAR will no doubt be a huge talking point ahead of next season and with Noble likely to be one of the cheapest penalty taking options he may well become a viable FPL consideration.

Sean Dyche’s reluctance to use two strikers in the early part of the season hit Wood’s minutes and restricted him to 32 FPL points from his first 19 appearances but the departure of Vokes allowed a partnership to form with Ashley Barnes and led Wood to more than treble that tally of points over the second half of the season and make him the 3rd highest scoring forward since gameweek 19.

Claude Puel severely curtailed Vardy’s partying during his spell in charge but the appointment of Brendan Rodgers has reinvigorated Leicester’s frontman and saw him rack up 108 points in the second half of the season. A continuation of this form into next season would see him challenging to be the top scoring forward at likely a considerably cheaper price than his more illustrious counterparts Agüero, Kane and Aubameyang.

Rondon played a major part in the now traditional Rafa revival which saw Newcastle put a run of results together in January and February to pull comfortably clear of the relegation zone. His strike partner Perez also registered 91 points in the second half of the season and Newcastle could well be worth FPL investment next year if they can convince Rafa to stay and Mike Ashley to get his cheque book out and sign Rondon permanently.

The following table shows the top 50 scorers for the second half of the season. 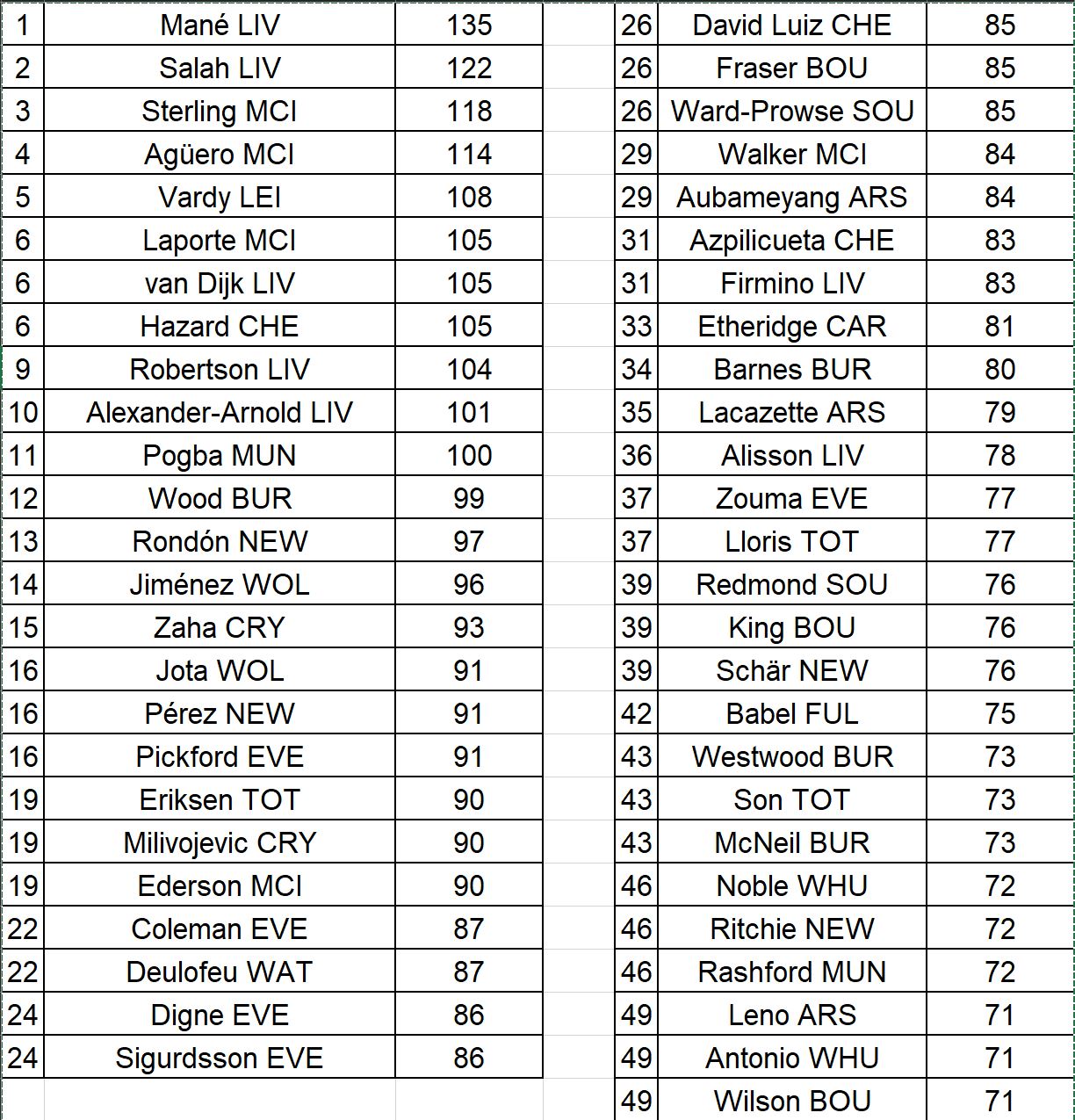