Bournemouth and Wolves have both made impressive starts to the Premier League season, sitting 6th and 10th in the table respectively. With their FPL options priced attractively this has led to rapid increases in ownership for players like Wilson, Fraser and Doherty who have regularly produced points in the opening 10 gameweeks. However with Wolves facing Arsenal and Tottenham in their next two fixtures and Bournemouth facing 3 of the “big six” in the next 5 gameweeks is it time to consider looking elsewhere?

The gap between the big six and the remainder appears to have widened this season with Man City, Liverpool, Chelsea, Arsenal, Tottenham and Man Utd dropping just 17 points from a possible 132 in games against the rest of the league and this looks to hold true from a fantasy perspective too. Man Utd are responsible for 8 of those 17 dropped points and look by far the easiest FPL opponent of the big six so far this season. Non big six sides have averaged 36 points against United in 8 fixtures this year compared to just 20 points against Man City and 21 points in games against Liverpool.

The following table shows FPL points scored against the big six by non big six teams so far this season. 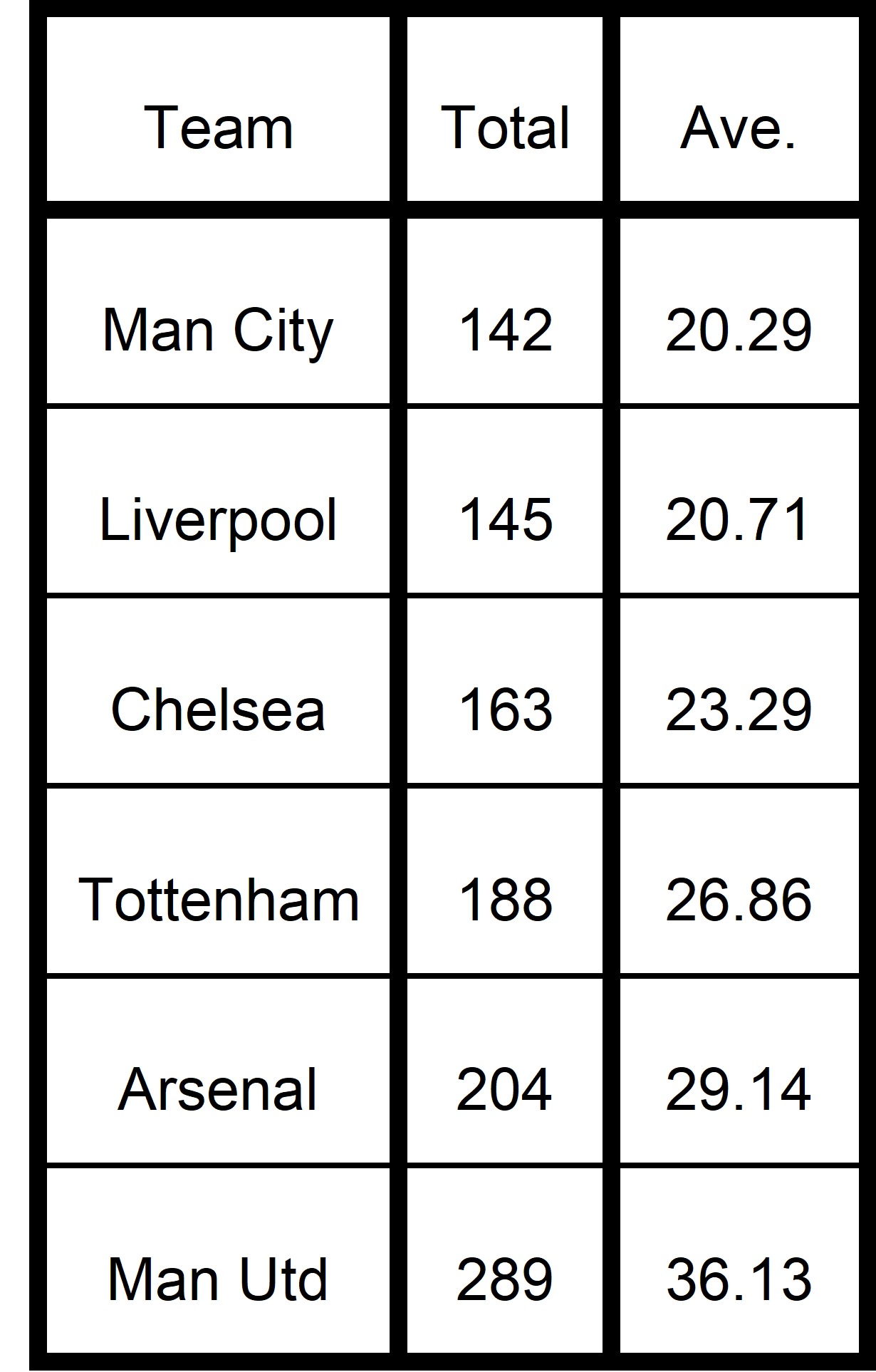 Wolves face the tough task of Tottenham and Arsenal next but with those games followed by the FPL goldmines which are fixtures against Cardiff and Huddersfield it may pay to hold Wolves players and potentially just bench them over the next couple of weeks. However for anyone doubled or even tripled up on Wolves players their underwhelming last two results coupled with tough fixtures may be enough to consider looking for value elsewhere.

Bournemouth’s prospects are one of the most difficult to assess. There are many examples of unfancied, smaller clubs making unexpected challenges for the European places in the Premier League, think Ipswich 00/01 ,Fulham 08/09 and Burnley last season. Bournemouth could well join those ranks this year with players like Wilson, Fraser and Brooks in the form of their lives and looking capable of causing problems for most sides in addition to the normally porous defence tightening things up and keeping 3 clean sheets in a row. With 10 of Bournemouth’s next 19 fixtures against teams from last year’s top 6 this will be a defining period for their season and deciding whether their players will continue to perform FPL wise during this run or if their returns will drop off a cliff could be a major influence on FPL manager’s seasons. Last season holding Richarlison for too long had a negative impact on many people’s OR and with Wilson and Fraser both comfortably above 20% ownership they have the potential to deal similar blows.

Bournemouth and Wolves may be way down the list of priorities to sort out in your FPL squad but if you are looking to make longer term moves then weighing up the impact their tougher fixtures may have should definitely be a consideration. Bournemouth look capable of producing attacking returns against almost anyone so it may be a case of monitoring them for the time being. A higher proportion of Wolves points have been scored defensively so their tough fixtures are probably more of a concern and reason to sell.

From a personal point of view I regretably sold Fraser during his last bout of Internationalbreak-itis and his upcoming fixtures make it hard to justify bringing him back in but if I was currently holding him or Wilson I don’t think I’d be in any rush to sell. I’d maybe just be looking at adding some Burnley or Newcastle cover to rotate in when Bournemouth play Man City and Liverpool in gameweeks 14 and 16. A home fixture with Huddersfield sandwiched between in gameweek 15 would still make selling before Man City a tough decision.

My squad currently features triple Wolves in the form of Patricio, Doherty and Jimenez. I have no plans to sell Doherty and I’d imagine he’ll be in my squad all season barring injury. A cheap defender in a decent team that gets forward at every available opportunity, he will no doubt prove to be one of the standout FPL assets this season. I think Patricio will be the top scoring 4.5m goalkeeper this year but a non playing 2nd keeper makes a (possibly temporary) move to Fabianski to avoid a Wolves defensive double up tempting. My plan for a while has been to bring in Arnautovic ahead of gameweek 11 and Jimenez looks the most likely sacrifice for that plan given he’s been subbed off early in each of the last 3 games.