With the Consistent returns from the likes of Hazard, Aguero and the fixture turn favoring the Liverpool assets, budget constraint is vital in dictating the combination of premium attackers. While the Alonso, Robertson and Trippier combination is a favored one, the combination costs a whopping 19.6m. While a coverage may be necessary from the 3 teams, are other defensive combinations from the teams worth considering?

For analysis, a consideration of performances over the last 5 weeks will help us paint a clear picture. 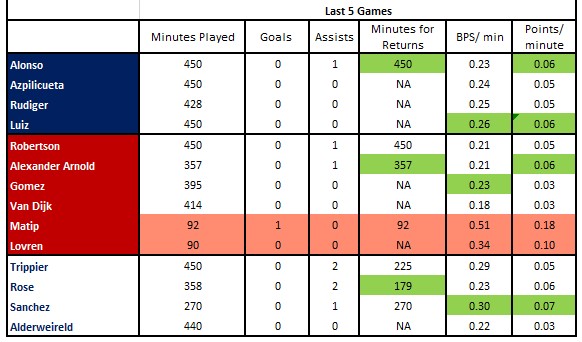 While for the pace setters, Alonso might be a set and forget Chelsea option, the chasing pack will have to search for value elsewhere. In the last 5 games, David Luiz (5.5m) has matched the points tally of the maverick left-back.  David Luiz has looked a lot more assured in defense and hasn’t been shy when it comes to through balls. With 8 games done, Luiz being a cover for Christensen, till the later assumes match fitness theory is no more valid. Luiz has cemented his place as the first-string CB alongside Rudiger. Luiz is also on the occasional free-kick and might find the back of the net sooner rather than later. Chelsea have also been awarded the second most corners (51) and if Willian can improve on the deliveries into the box, Luiz stands to benefit. So, if you are chasing points and on a WC, it might not be outrageous to save 1.5m from the Alonso – Luiz switch and invest elsewhere.

While nearly 28% owners have invested in Robertson, his attacking returns have since dried up. Both Robertson and TAA have the same number of attacking returns in the last five (1 assist). Trent has edged out Robertson in points per minute over the last five. The one game rotation might have put managers in a sense of skepticism, but Roberston has played two back to back to 90 minutes for Scotland. Moreno might be used more in the next few with UCL games lined up and Napoli giving Klopp a thing or two to worry about. TAA is also a regular on direct free kicks and matches the BPS per minute set by Roberston for the last 5. Trent wasn’t used in the game against Croatia and only briefly against Spain and will be the fresher of the two fullbacks. The right back offers further opportunity to save 1.1m, which can be invested to upgrade the midfield and forward line.

With the memories of that World Cup free kick still fresh, it has been hard to overlook Trippier as the only Spurs defensive option.  More than a third of the managers have opted for the flamboyant right back. He now boasts a hefty price tag of 6.3m.  With Spurs still in the Carabao Cup and the faltering in the UCL, rotation is a worry. Aurier has regained some fitness and played 90 minutes for Ivory Coast against Central African Republic. A brief look at the data set reveals that Sanchez might be a rotation proof entry into the Spurs back line. With the unfortunate injury to Vertonghen, Sanchez is likely to be the primary CB alongside Alderweireld. Sanchez has started 3 out of the last 5 and during that time has managed an assist. He has a higher BPS per minute as compared to the Spurs fullbacks and boasts a higher points per minute. He is priced at 5.8m, a nifty half a million cheaper than Trippier. He has an ownership of 1.8% and can act as a perfect foil to the more expensive, highly owned Trippier.