36 changes in personnel, the leakiest defence in the Premier League and just 5 points from the first 12 games of the season, Slavisa Jokanovic became the first manager to be sacked this season. The man they call the Tinker Man comes in and is tasked with steadying the ship and guiding Fulham out of the relegation zone. Barring Mitrovic and perhaps Schurrle there haven’t been too many fantasy options to choose from this Fulham team. Ranieri got off to a winning start in his first game v Southampton. A change of formation and tactics may open the door for some cheap fantasy assets. So what has changed from the first game in charge?

Ranieri made only one change from the defeat to Liverpool with Jean Michael Seri coming in for the injured Frank Zambo Anguissa. Seri partnered Callum Chambers as a holding midfielder in a 4-4-2 formation when Fulham was out of possession. Going forward they played more of a 4-2-3-1 formation which Ranieri used at Nantes last season. This saw Mitrovic playing up front with Sessegnon and Schurrle providing width either side. Tom Cairney was playing the number ten role and his average position was often in line with Mitrovic or ahead of him. 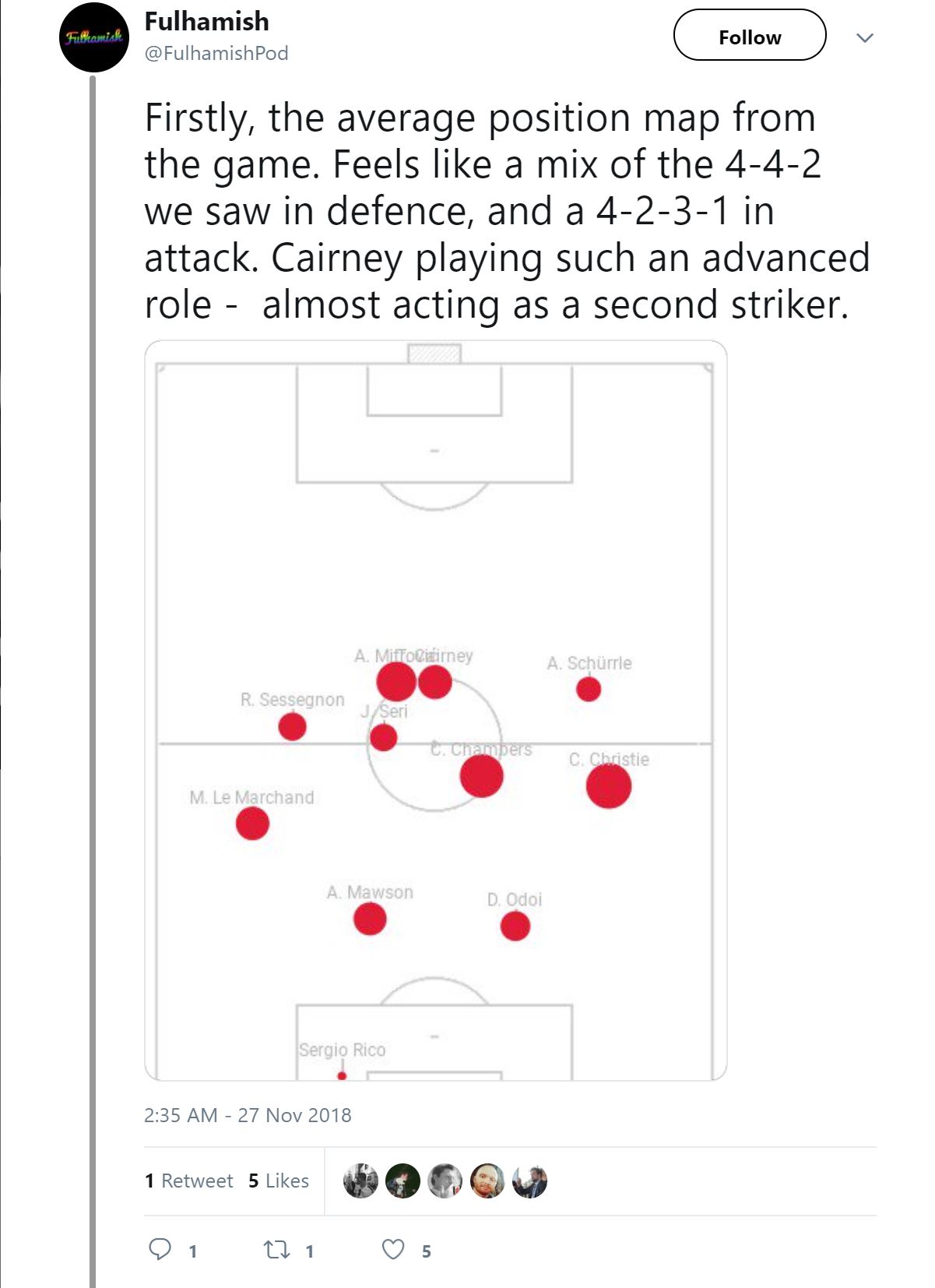 Cairney scored 6 goals and provided 5 assists in an injury-hit season which saw Fulham promoted. The previous season saw him with 13 goals and 10 assists and Ranieri wants to see him scoring more.

"Ranieri on Cairney: “He is a fantastic player and a free man, his left foot is amazing and he can do everything. With him, I want to score goals like he did in the Championship, because he is a goal scorer. He has to assist or shoot at goal I said before the match and I am very pleased, well done.”"

At just £4.8m he could be an interesting option for a 5th midfielder.

Mitrovic scored another two goals v Saints to bring his tally to 7 for the season and brings him back amongst the top goal scorers in the league. Ranieri was full of praise for the Serbian claiming that he is one of the best strikers in Europe. With those 2 goals from four shots in the match, he seems to have piqued interest among fantasy managers once again. For me, I’m going to wait and see on Mitrovic. No doubt he’s a talented striker but with Chelsea, Leicester and Manchester United in the next three I think those matches give us an opportunity to see if Fulham can improve further under Ranieri against better opposition than fellow strugglers Southampton. Mitrovic is also walking the suspension tightrope on 4 yellow cards so it’s probably best for him to miss that game first before switching one of your budget forwards for the Serb. 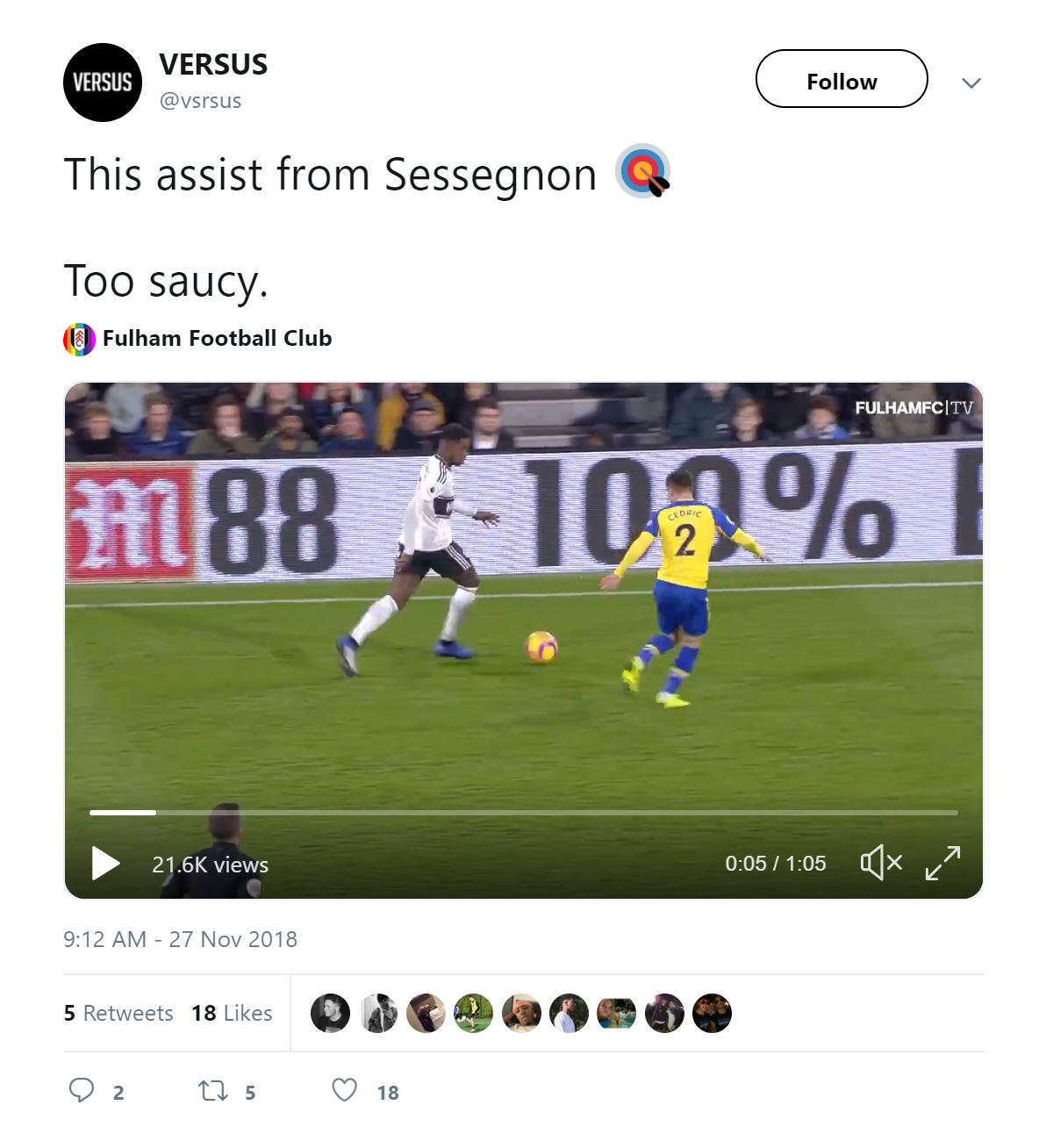 Both Schurrle and Sessegnon bagged themselves attacking returns, Schurle adding to his goal tally and Sessegnon with 2 assists, the first of which was a beautiful ball Kevin De Bruyne would be proud of.  There was a moment in the game when Mitrovic had a shot which McCarthy got a big hand on. Last season Sessegnon would have been first to the parried shot but he didn’t gamble on Saturday. Having been played in a more defensive role this season I think we will now start to see more of the Ryan Sessegnon that lit up the Championship last season. Joe Bryan has returned to training and should now be available to start at left back which should see Sessegnon continue in more advanced positions.

Schurrle’s goal came from his only goal attempt of the game. That’s a big change for the German who before GW13 was second highest for goal attempts with 37, averaging 3 a game, most of which came from outside the area. I thought he was quite wasteful and possibly Ranieri has asked him not to take as many shots unless in a good position.

There was no McDonalds to be had for the Fulham team having failed for the 13th time to keep a clean sheet in the Premier League. The defence is still a work in progress and something which realistically couldn’t be solved in such a short space of time. Sergio Rico appears to have nailed down his place between the posts. Elsewhere Cyrus Christie had a good game and it was good to see Alfie Mawson finally getting his place in the team. Calum Chambers played as a holding midfield role in the absence of the injured Kevin McDonald and Frank Zambo Anguissa. Fulham Gave up a lot of shots against Southampton and Its hard at this stage to even consider a Fulham defender.

What was different about this game compared to the first 12? First of all, Fulham had much less possession of the ball and seemed happy to counter the opponent. One thing that was very apparent was the fight in the side, something that was non-existent against Huddersfield and other teams. Heads didn’t drop having fallen behind to Southampton and they battled back to lead going into the break. Having almost gone 3-1 up and then to lose the lead moments later it was refreshing to see heads didn’t drop and the team battled hard to not only regain the lead but also to hang on for the win.

We won’t be booking Bocelli just yet as there’s still a lot of room for improvement but there are some encouraging signs. Hopefully the win will give the players confidence going forward and The Tinkerman can work his magic.