The Ultimate Guide to Pep Roulette

One of the most frustrating things about FPL in the last couple of seasons has been Pep Guardiola’s insatiable desire to rotate his team. As a City fan, it doesn’t grate on me as much as it does others, we have an abundance of talent in the squad and it has to be competitive in 4 competitions.

Trying to predict who will play is impossible but you’d hope, being a City fan, it’s a little bit easier. In this article I’ll try and explain the battles that will be going on for each position in the City squad throughout the season. I’ll also try and predict who will start the season.

City broke the record for the number of players at the World Cup and therefore lots of players have come back late with some not even back yet.

At the time of writing (Monday 30th July) everyone but Kyle Walker, Kevin De Bruyne and Raheem Sterling is back in training and seemingly available for the Community Shield against Chelsea.

"At the time of writing (Monday 30th July) everyone but Kyle Walker, Kevin De Bruyne and Raheem Sterling is back in training and seemingly available for the Community Shield against Chelsea."

Bravo did ok in pre-season but Ederson should go straight back in.

Walker had this spot nailed last season apart from a few games after we won the league. However, he is only back the week before GW1.

Danilo went to the World Cup but barely played. I’d have said he’s a cert to start the season but he is currently injured without a return date.

If Danilo recovers in time to get minutes v Chelsea I’d expect him to start v Arsenal. If not, Pep may just throw Walker straight back in because he is such a physical specimen.

Stones had a brilliant start to the season but went off the boil after suffering a hamstring injury. His stock has risen though, and after a good World Cup there are calls for Pep to make him first choice CB. With him being back earlier than expected that may well happen.

Otamendi was the best CB in the league last season and was the reliable pick in City’s defence. However, he returned to his old ways with Argentina and saw them go out early. His extra rest over Stones might get him the start v Arsenal.

Laporte put in some really impressive performances towards the back end of last season and didn’t go to the World Cup. I’d say he’s nailed on to start v Arsenal.

Kompany is probably City’s 4th choice CB because the other three are better on the ball than him. Pep sometimes throws him in for big games though for his influence.

Laporte definitely. Then Otamendi or Stones.

Mendy hasn’t played any pre season minutes, which puts him and Delph on a level playing field. I expect Pep to rotate these two tactically: Mendy when we need more attacking threat, Delph when we need to retain the ball.

You’d think Pep would lean toward his £50m left back but look to the Community Shield for this one.

I believe Fernandinho is the best defensive midfielder in the league. He is so underrated. We were disappointed to miss out on Jorginho who would have been a nice alternative to Ferna but we’ll be ok.

Gundogan will step into that defensive midfield role when Ferna needs a break.

KDB is the talisman of this City team and is the most consistent attacking pick. He’s played non-stop football since last August and earned a break. He won’t start v Arsenal but don’t rule out him playing some part.

David Silva, as class as he is, had admitted himself he expects to play less this season. He’s getting older and we need to start thinking about his replacement. Pep may test Bernardo Silva in that position to see if he’s up to it.

It’s ridiculous that a player as good as Gundogan is a utility player for us but he is. Not as good as Fernandinho, Silva or KDB so won’t start but will get a decent amount of minutes. Probably not enough to be a viable FPL option though.

When we signed Bernardo Silva he was touted as David Silva’s replacement and there are signs that process could begin this season. He played in his preferred right wing position last season but after the talk of him moving inside, he finally played there in pre-season. Whether this makes his FPL stock rise or fall I don’t know, but at £7.5m, keep an eye on him.

This is Sane’s position. No one else in the squad is a natural left-winger and with him being dropped from Germany’s World Cup squad he has a point to prove. Watch him fly.

Sterling and Mahrez could play there if they needed to but are much more effective on the right.

Sterling had a great season last season and was the second highest scorer in FPL. However, him being back late from the World Cup leaves his usual right wing spot up for grabs. The signing of Mahrez points towards Sterling’s minutes being reduced but look out for him maybe playing up front.

Ready to take that spot is Riyad Mahrez. He has started every pre-season game and looks pretty assured for this spot at the moment. We all know his FPL points potential and playing in this City team could unlock that potential once more.

The signing of Mahrez is another reason Bernardo could move inside as it’s getting quite cramped out there on the right wing but his two goals against Bayern show he isn’t giving up his place without a fight.

Agüero or Jesus is the main source of frustration in Pep Roulette. Both capable of scoring lots of goals, both expensive but both could be rested at any point. The fact they’re both back in training at the same time doesn’t help either.

However I think Agüero is his first choice. Some interesting stats from @Seb_Hodson132 point towards this. Agüero started 22 out the 25 games he was available for, with Jesus only picked ahead of him twice when he was fit. (Sterling started ahead of both of them once to complete that maths).

Again, with so many options on the right, Sterling could play up front like he did for City towards the end of the season and for England at the World Cup if needed. If we ever play 3-5-2 I’m pretty sure he’d always be one of the two up front.

Who will start the season 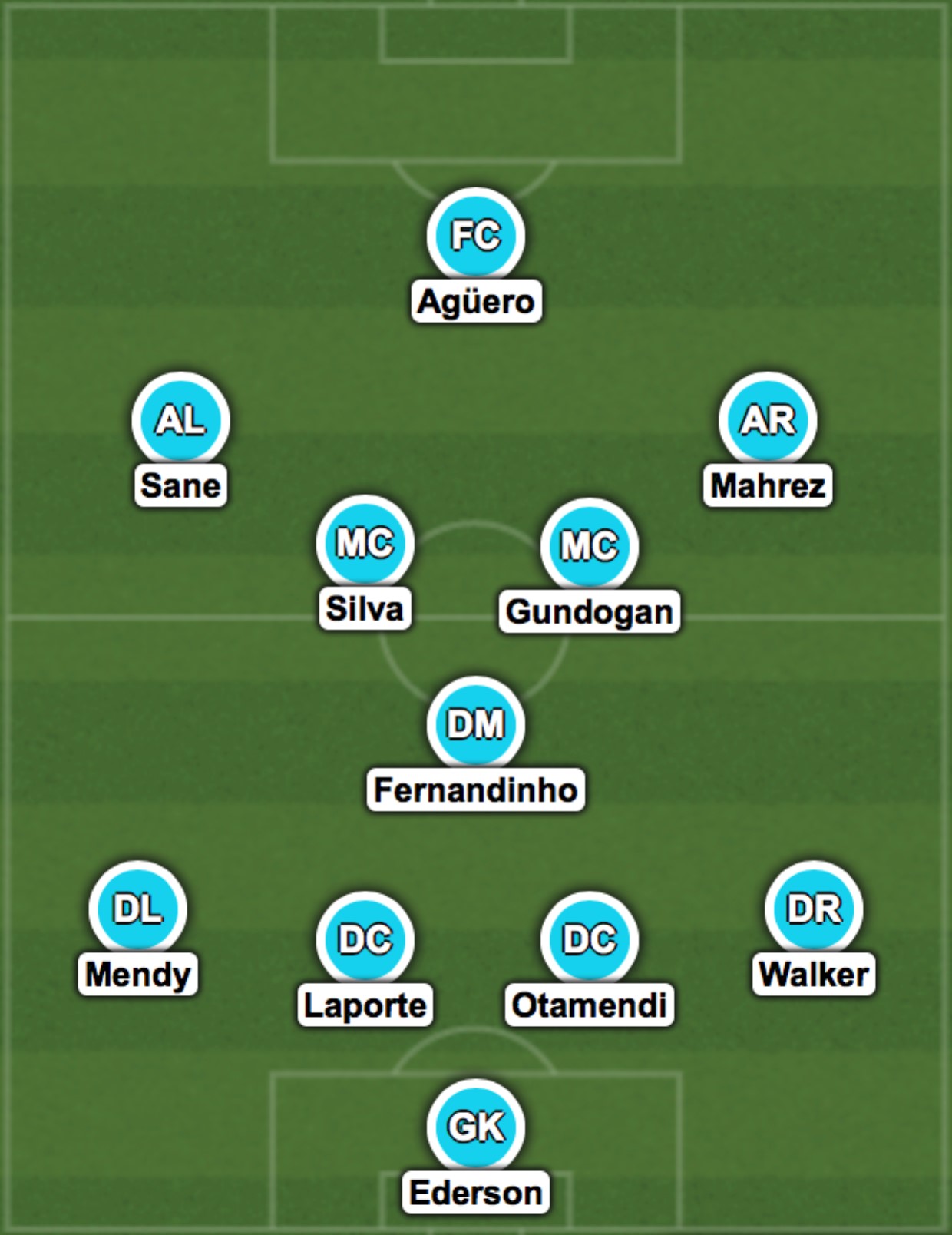