The Solskjær effect seems to have well and truly worn off at Manchester United and with just 2 wins in their last 10 games it has certainly led to many FPL managers rethinking what seemed like a straightforward investment in Utd assets ahead of plum season ending fixtures away at Huddersfield and at home to Cardiff. Countless FPL managers held the likes of Pogba and Rashford, and their accrued value, through their tough looking double gameweek with these fixtures in mind however United’s FPL returns have almost completely dried up in recent weeks with Pogba (23) and Mata (12) the only 2 Utd players to score more than 10 FPL points over their last 5 fixtures. With this in mind it seems almost ridiculous to be considering transferring in United players but are the fixtures just too good to ignore?

The top 6 sides have accumulated a whopping 1464 FPL points from 22 games against Cardiff and Huddersfield this season with 29 top 6 players scoring 20+ points against the pair so far. 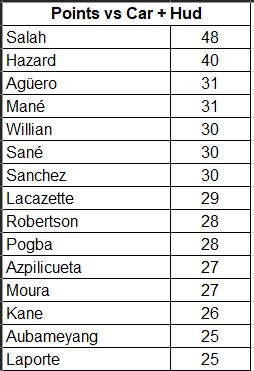 United’s defensive fragility has been apparent recently with their last clean sheet coming over 2 months ago when they put a dent in Liverpool’s title hopes with an impressive shut out of Mané, Salah, Firmino et al. Despite these struggles the task of facing the likes of Mounie, Niasse and Reid should be significantly easier than anything they’ve faced of late which could make investment in the relatively low owned United defence worth considering. Shaw and Lindelof are owned by 6% and 5.2% respectively and are at a price point which isn’t prohibitive for those looking to offload Duffy now he’s outlived his double double plus Newcastle shelf life. David De Gea has uncharacteristically produced some high profile and costly blunders in recent games but at just 0.65% top 10k ownership any return to form could handsomely reward his owners.

Proposing an unenforced goalkeeping change will be a vomit inducing prospect for many in the FPL community, and doing so for a keeper arguably in the worst form of his Premier League career will seem even more absurd but hear me out. Whether by design or through sheer incompetence, United allow a large number of shots against and De Gea (119) is only behind Fabianski (140) and Etheridge (127) for saves made this season. Cardiff and Huddersfield both average more than 10 shots per game but have struggled to convert these into goals with Cardiff averaging a goal every 13 attempts and Huddersfield averaging a goal every 19 attempts which may suggest De Gea will get some fairly routine chances to add to his save tally. Injury doubts over both Rashford and Lukaku could see United relying upon the inexperienced Greenwood, a seemingly over the hill Sanchez or an uninterested Martial for firepower which could conceivably result in a lack of goals and both United’s 1-0 wins this season have seen De Gea gain maximum bonus and a double figure FPL return.

Despite United’s downturn in results the remaining fixtures are too good to ignore in my opinion. Teams have been racking up points against Cardiff and Huddersfield all season regardless of form and we know Utd’s players are more than capable of hauling in these type of games. Pogba is already highly owned and will no doubt be one of the most transferred in players this gameweek but all of his teammates, injury doubt Rashford aside, will be differentials for the run in and with those fixtures could help make significant gains in mini leagues or overall ranking. As uninspiring/crazy as it may sound I am genuinely considering a move from Lloris to De Gea this week, hopefully it pays off with 2 clean sheets, plenty of saves, a couple of bonus points and who knows maybe he’ll go all Ederson on us and volunteer himself for penalty taking duties.