West Ham – What’s Changed, What it Could Mean

So a good return of points 7 points in 4 games with one of those city, I will take that, given where we were last season after 4 games without a single point , the fixtures have been easier on paper but points are points and the team are not under pressure in the same way as last season. With a kind run of fixtures with just 1 of last years top 6 and home games V Man Utd, Palace, Sheffield Utd and Newcastle so plenty of us will be looking at an asset from them in FPL.

After the Man city game a somewhat fortunate draw away at Brighton earned the first point, followed up with a win away against a poor Watford who have carried on last season’s poor form, next up were Norwich who had showed they can score goals so up against a defence that is prone to mistakes and conceding goals was expecting a few goals either way. Going into the game Antonio who was playing well even when not starting picked up an injury, whilst this is a blow to the team and squad, in FPL terms it makes things somewhat clearer and the team could be in for a more settled period in terms of selection.

The result of 2-0 was a good one, much has been made of Norwich playing poorly, some credit needs to go to West Ham for a very good team performance and on the day 4 or 5 would not have been unreasonable. I’m not sure it’s a sign of some newfound defensive solidity, based on previous experience I would say not, currently the back 4 should stay as it is, Fredericks, Ogbonna, Diop and Masuaku. Obgonna is probably the player at most risk with Balbuena in the wings, but until a bad game he should be expected to continue. Coinciding with this is the return of Noble, much maligned but he must have something as it keeps happening under different managers each season when he comes back in to the team, Rice benefits from his experience as well as his bond with the majority of fans and influence and drive he gives the team as captain and leader.

I want to focus on the attacking 4 as this is where our strength is and if that translates into goals that means points, the injury to Antonio and the sale of Hernandez means there are realistically 5 players for 4 positions. Fornals has been sub and is still adjusting to the intensity and physical nature of the Premier League. This means that subject to injury the 4 and how they line up would be Yarmo on the right, Lanzini in the middle and Anderson on the left with Haller up top.

I will cover all 4 below, there is a bigger focus on Anderson as his move back to the left could prove significant, for Anderson what is key and needs to be watched is who plays as this may affect his playing position, in pre season and the first couple games he was stationed on the right, I think he is better and more dangerous and likely to score on the left where he played most of last season. Should Fornals come into the team it could change his playing position and Lanzini may move to the left. Fornals will get minutes for the time being that will be off the bench.

Haller needs little introduction now, 3 goals and looking good for more, he could end up being the highest FPL scorer and in the current run of games is a decent shout for a fwd position in our FPL teams. He is strong, holds the ball up well and brings in others, he offers assists as well as goals and the fans have warmed to him, he can score tap ins or the more spectacular goals as well and is very agile and good with his feet for a big man.

Lanzini has been the most settled and value pick recently at 6.5, he has had some injury issues with spells out but has started the season well, linking up play and according to Sofascore app has averaged 1.5 shots per game and was unlucky not to score v Norwich were it not for a good save from Tim Krul. He is getting into the box as well as playing in others so offers both goals and assists and is capable of picking up bonus points.

Yarmolenko after last season’s injury has worked his way back starting the last 2 games which have coincided with 2 wins, he’s a strange player to watch in a way as he doesn’t seem to offer much for large parts of the game, the way he runs and moves seems languid and lazy, but he does have this ability to produce one or 2 moments in game, scoring against Norwich. He hasn’t picked up any bonus yet and because of his lack of all round contribution in games he may continue not to, part of this is his minutes could be manged to reduce risk of injury but he is 6.0 but there are others in FPL around this price

Last and my no means least, Felipe Anderson, still somewhat fresh in managers minds is last season trolling where many brought him in only to find he blanked in games that you would have expected returns, I was one of those managers. What is overlooked is 155 points and at 6.9 at the time of writing he offers decent value. Anderson is very bonus point friendly. one of the things I find useful on Sofascore is the team and top player section it gives a rank on Shots on target , passes, big chances created tackles, and on all Anderson ranks highly last year within the team, top or 2nd in many key areas , one of the more surprising is tackles where he ranks 2nd to Declan Rice, so he can rack up BPS for when he scores or assists. Here are the screen shots of a comparison in the last games v Lanzini and secondly Haller so you can see how he compares. One thing to bear in mind with Anderson is he is a classic confidence player, and his confidence was sky high V Norwich, some of the skill and trickery he displayed getting past 2 or 3 players was special, aligned with good pace with the ball he’s going to create chances for himself and others.

Over the next 8 fixtures there may not be a lot between the players aside from Yarmo possibly to be the lowest of the 4 but they offer a route in across the range of budgets from 5.9 to 7.4. 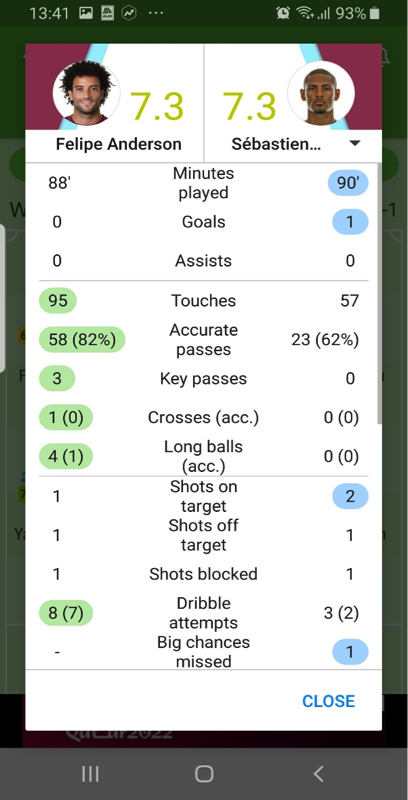 Over the next 8 fixtures there may not be a lot between the players aside from Yarmo possibly to be the lowest of the 4 but they offer a route in across the range of budgets from 5.9 to 7.4.